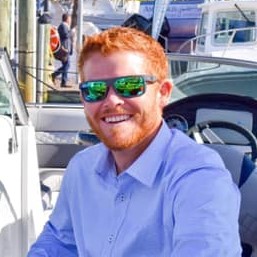 Stuart Sohovich joined the team of Bluewater Yacht Services in November 2019. He is very excited to be part of such a great company and assisting with the expansion of their service division in Maryland.
After graduating Marine Mechanics Institute (MMI) with honors in 2015, Stuart returned to Maryland to work in the marine industry as a marine technician.

Stuart grew up in Southern Maryland. From an early age, Stuart was very mechanically inclined, fixing tractors and cars, always curious about machinery. It was his dream to go to MMI which was realized in 2014. At MMI he learned from the very engineers who designed the Yamahas, Volvos, Mercury and other brands, and was taught how to diagnose and repair the motors as well as full operating systems and electronics.

When not working on boats, Stuart enjoys the outdoors. Depending on the season he is either hunting or fishing.