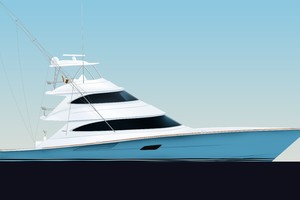 Viking Yachts has once again pushed the limits as the industry’s leader in sport-fishing and yacht manufacturing. In their constant drive to build a better boat every day, they announced their newest model, the Viking 90 Convertible. The Viking 90 Convertible is a slightly smaller version of the popular 92, built to comply with new Tier III emissions regulations put into place by the International Maritime Organization. Because the length of the 90 will fall under the minimum threshold for the regulation, it will not be required to have a Selective Catalytic Reduction (SCR) system. Investing $15M in research and development, Viking took the opportunity to make several improvements from the design of the 92 to perfect the 90.

Viking engineers were challenged to reduce the gross weight of the previous 92 by 10% and utilize the state-of-the-art propulsion system currently found in their popular 80 Sportfish. When asked about the new design, Viking President and CEO Pat Healey commented that “we’re going to have speed, performance and handling that is going to be phenomenal, and we are excited.” The convertible is estimated to hit 38 knots and the enclosed version will top out at 37 knots. The new model will also feature a major improvement to the layout, with the entry door for the salon being shifted starboard, which allows for aft-facing seats on the mezzanine instead of the previously offered forward-facing lounge.

The rest of the 90’s layout is remarkably similar to that of the 92. The cockpit will feature three levels, with a traditional cockpit below, a centerline mezzanine seating area above, and the aft-facing seating area with a table above. Stepping into the salon, you will find a large sofa to port, along with a day head and entertainment center to starboard. The galley is situated forward, and includes wraparound countertops, bar seating, a u-shaped dinette, and plenty of storage. There is also a private crew quarters on the main deck, as well as an additional day head for guests.

A few steps below will bring you to the lower deck, which houses most of the overnight accommodations. The full-beam master stateroom is located aft, and includes a king-sized bed, a sofa, a dressing table, two heads, and a spacious shower. For guests, the 90 Convertible will also have five more staterooms on the main deck: a starboard side VIP, a forward VIP, a port-side crossover berth, and a port side single berth. The lower deck also includes four heads aside from the two in the master stateroom. Finally, the 90 will have another private crew quarters situated aft of the engine room with private entry from the exterior of the boat.

The Viking 90 will be offered as an open-bridge convertible, an enclosed-bridge, or as a sky-bridge, just as the 92 was. Hull number one is set to debut at the Miami Boat Show in February of 2023. There are already several models on order, so please contact your Bluewater Yacht Sales Viking specialists for more information or to secure your slot.

Back to Inventory Results