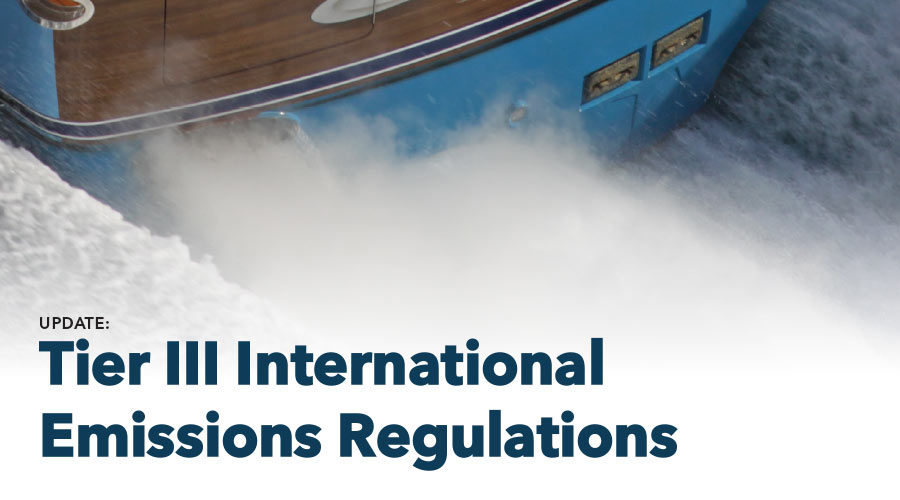 Last year, Bluewater Yacht Sales reported on looming emissions standards that could have proved problematic for the future of large recreational yachts. The International Maritime Organization’s Tier III Emissions Standards went into effect in 2021, regulating all vessels with a load line length of 24 meters or greater (roughly 90 feet or 27 meters in LOA).

The new proposed emissions standards are difficult to meet without the use of Selective Catalyst Reduction (SCR) systems. The issue for the recreational marine industry is that the development of these systems and their integration with current high horsepower diesel engines is limited and incomplete. SCR equipment would also add bulk and weight to an already cramped engine room and require additional ventilation and cooling systems. Plus, the added tankage for Diesel Exhaust Fluid (DEF) or Urea needed for the system to operate would require even more space.

The engine rooms of the Viking 92C and 93MY would become much more cramped with the addition of SCR equipment.
See this article in our Summer 2021 issue of OnBoard Magazine
The many issues with implementation were expressed by the National Marine Manufacturers Association (NMMA), Viking Yachts, International Council of Marine Industry Associations (ICOMIA), and others. Pushback from these well recognized organizations was heard by not only the IMO but the United States Coast Guard (USCG). They released a statement effectively saying they have no intentions of enforcing the new Tier III standards which will offer a reprieve for the yacht manufacturers.

The Coast Guard cites the unavailability of engine technology for this class of vessel to meet the regulations, and states that its non-enforcement policy will be in effect from “Jan. 1, 2021 until suitable engines are available, or through Dec. 31, 2023, whichever is earlier.”

The Tier III emission limits for marine engines has been around since 2016, but ICOMIA was granted a five year extension for recreational vessels that was set to expire in 2021. When this initial extension was set, it was hoped that marine engine and exhaust manufacturers would be able to bring technology to market that was affordable and easy to implement on vessels in the 90 to 150-foot class. Unfortunately, the technology was not ready for market and the COVID-19 global pandemic added to the challenges.

Viking Yachts President and CEO, Pat Healey led some of the lobbying efforts against the increased regulations, holding a press conference at the 2019 Fort Lauderdale International Boat Show to increase awareness. He acquired the support of several yacht builders and marine organizations to press the IMO for an additional extension.

Healey explains, “We’re pleased that the Coast Guard is supporting the recreational marine industry by recognizing that the technology to comply with these emissions standards currently does not exist for this market segment.” While the extension provides an opportunity for Viking to continue building their large yacht range including the 92 Convertible and 93 Motoryacht for at least three years, Healey says, “We will continue supporting and working with the engine manufacturers and environmental agencies to pursue the fastest plausible path to the development and implementation of technology that provides safe, reliable and fuel-efficient marine propulsion for our customers.”

SCR and other emissions technologies have come a great distance in the past five years, but in most cases, more development and testing are needed before these systems are market-ready and able to be implemented in a practical manner. Manufacturers rightly feared that this looming regulation would be putting many marine industry jobs in jeopardy, arguing the risk of negative economic impacts far outweighed the benefits of the Tier III requirements. Thankfully, the Coast Guard agreed and Bluewater couldn’t be more pleased with the efforts by our partners at Viking Yachts and the NMMA to help promote, grow, and protect our industry.