An Adventure in the Plana Cays with “ODIN”

Long time Bluewater customers, Jerry Taylor & Nancy Bryant have owned several Viking Yachts, and recently just took delivery of their new 62C Enclosed Bridge. The ODIN name has lived on from each of their boats, and they have seen many great adventures aboard their Vikings. One such adventure took place aboard the former ODIN, a Viking 61C Enclosed Bridge, in the summer of 2008 around the Plana Cays – two small islands in the southern Bahama Islands. Nancy Bryant later chronicled the amazing events of this adventure and how their plans for the day were quickly derailed, resulting in a battle to get back to their Odin. Her story follows:

Today we planned a big day, a tender ride around the island of West Plana Cay to the neighboring island called East Plana Cay, some SCUBA diving, a picnic on the beach, some snorkeling and spearfishing and more diving then the late afternoon ride home back to our anchorage. Little did we know how big the day would end. 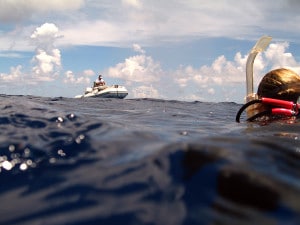 The East and West Plana Cays are separated by about three miles of open ocean.  We had anchored the ODIN on the west side of West Plana in front of a beautiful long stretch of white sand beach and out of the moderate east wind.  The trip in our tender to our dive destination off East Plana was about 4 ½ miles, a thirty minute ride.  There was a slight chop to the water surface from a wind blowing out of the south east.

We left around 9 am and in a little over an hour reached our destination, the site we had dived last year. We geared up and went in the water about 10:30. The reefs were beautiful and the colors of the coral were spectacular.  It was a wall dive at about 75’ so we drifted with the current.  Jason followed us in the tender.

After about 40 minutes we surfaced telling Jason how gorgeous it was and that he needed to go down and see it.  I had enough air left so he could use my tank and Jerry’s BC.  He was down about 25 minutes coming up at a place he said was even prettier.  We marked the spot on the GPS and motored over to the beach at East Plana looking for a place to have our picnic.

We discovered that close in coral reefs completely surrounded East Plana and the shoreline was treacherous so we had our picnic in the tender.  Jason did some snorkeling and spearfishing. 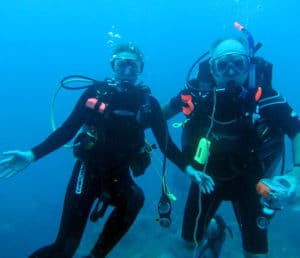 About 1:15 pm we returned to the dive spot we had marked earlier.  We cut the engine and Jerry and I put on our tanks and went in the water.  I went in first and could easily see 50 feet down– gorgeous drop off with two large coral heads.  Jerry was gearing up and just when he was ready to go down, he could hear the “click, click” of the ignition.  The engine wouldn’t start.  The battery was completely dead and the boat was drifting in the south east winds.  Jerry called to me to “quick, swim back to the boat”. We handed our gear up and got in the boat.

We were adrift in the three mile stretch of open sea between East and West Plana Cays with the winds pushing us further away from the islands. We contemplated our predicament but the longer we deliberated, the further the wind took us.  We needed to get back to the ODIN which was 4 ½ miles away.

We put on our masks and fins and got in the water and started pushing the boat. We also tried our dinky little paddle but that was a joke!  After about 30 minutes, we calculated with the GPS that we were going about .9 of a knot.  We were 45 degrees into the wind with the current going against us.

With the cross wind, we thought we could make use of the Bimini top as a sail. We took it from its hinges and laid it on its side to catch the wind.  It actually helped. But still it seemed we were not getting closer to our destination.

To complicate matters, we soon learned, the east side of West Plana was also littered with sharp reef, most coming to the surface as far as ¼ mile out so there was no way we could get the boat to the beach.

We continued taking turns swimming and pushing and holding the Bimini top on its side to catch the wind.

At one point we got back in the boat to reassess our predicament but the more we reassessed, the more the wind took us the wrong way.  Back in the water!!

After two and ½ hours of pushing the tender toward the island we finally found a place that looked right.  It was in 17 feet of water and relatively clear of coral heads.  However, it was still a long way to shore.  We had no choice. 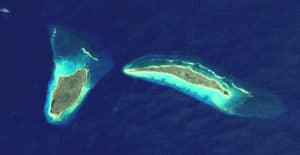 We dropped the anchor, put on our life jackets and packed the phone, crushable hats, sunglasses and Jerry’s wallet into our small waterproof “valuables bag”. We had five bottles of water that we put in Jason’s mesh snorkel bag and started swimming the ½ mile to the shore.  The swim took us through a large band of sharp staghorn corals and the waves would wash us into them.  It was not an easy swim but no one got hurt and we made it to the beach by 4:30—about a 20-minute swim.  We had now made it to the same island as the ODIN and what a tremendous relief that was.  But, we still had a long walk.

It was hot.  We were wearing life vests and carrying fins, masks, snorkels, water and the little bag and I was still wearing my wet suit from the dive.  It was easier to wear what we could rather than carry it.

We had no shoes.  Jerry had his dive booties with a hard rubber sole but  Jason and I only had on nylon snorkel socks.

The beach was littered with flotsam, trash and all sorts of debris that had washed ashore.  There were what seemed like miles of fishnet, floats, bottles, parts of boats, clothes and a small plastic waterproof container about the size of a cigarette pack.  Jason picked it up and inside was the driver’s license of a woman from Pennsylvania, two credit cards- one with her name, one with a man’s name and some money that had almost totally disintegrated. The driver’s license had expired as had the credit cards.  Jason kept it to send back to the woman with a note about where he found it.

We trudged on, walking in the hot sand occasionally stepping into the water to keep cool. Though strenuous, it was not hard on the feet but when we reached a section of sharp coral rock that blocked the beach and jutted out into the water it was unforgiving.  Jerry had his rubber soles but Jason and I had nothing.  Some how Jerry and Jason managed to forge ahead but I was lagging behind sometimes having to use both my hands and feet to climb over the sharp coral.

After an agonizing 15 minutes there was an opening in the coral where some sand had washed up and I could get back to the beach.  At this point, after a little over an hour’s walk we reached a bend and the shortest way around seemed to be by crossing a field.  Jason walked up a ridge and Jerry followed. When I started up my feet were filled with sand burrs.  With every step I had to bend over and pick out burrs.  I just wanted to cry!!

I finally could go no further through the burrs and retraced my steps toward the beach.  There was another large area of trash and I was thinking “Wouldn’t it be nice if I could find a pair of shoes.”  About that time, I spotted a well worn large size flip-flop with the toe piece missing.  I ripped off the back part of the heel and shoved it down into my right sock.  What a relief!  At least I had one foot that wouldn’t get filled with sand burrs.  About three more steps and I found an insole from an old tennis shoe—just my size.  It went into the other sock.  Perfect, I was set- ready to go back up the hill and across the sand burr meadow.

It was still a long hot trek.  Jerry and I both had to stop periodically to catch our breath.  Jason said that if he had stopped he would never have gotten up.

We had once again reached sandy beach and after another 30 minutes, rounded a third point and finally could see the ODIN sitting at anchor.  It was still a long way off but gave us all a slight burst of energy. 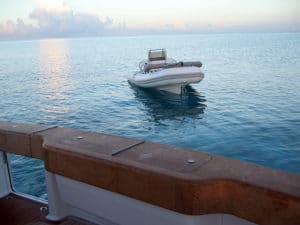 Once we finally got even with the boat we put on our fins again and swam out- about 1500 feet.  It was 7:00 pm.  There was no resting.  We rinsed off, stowed everything, started the engines, lifted the anchor and headed back around the island to retrieve the tender.  It was about a 20 minute boat ride back around the island the way we had walked and we got there just before sunset.  What a great sight to see the little boat still safely anchored in the wind just off the reefs.  We had only been gone four hours but anything could have happened in that time.

When we got close Jerry took the helm and Jason jumped in and swam with the tow line to hook to the tender. He got in the tender, secured our gear, raised the anchor and once he was ready, Jerry pulled the tender out timing it so it didn’t have a chance to drift back into the reef.  Once safely in deeper water Jason swam to the big boat and we went back around the island again to our anchorage.  Darkness had just set in.  We were all totally wiped out but nothing was damaged and we all survived.

We calculated that we pushed the boat 2 ½ miles, walked 3 ½ miles around and across the island and swam a total of .7 miles—not quite the day we had planned but none-the-less, another adventure. Dinner that night was brandy shots.