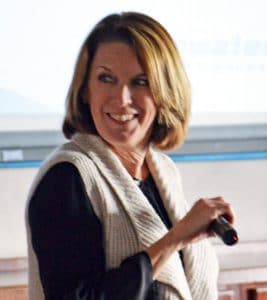 It is with great sadness that we announce the passing of Bluewater Yacht Sales President, Jan Boone, on May 29th after a courageous battle with cancer. This devastating loss to her family, friends & co-workers has also jolted the close-knit boating industry at-large. As condolences pour in from around the world, it is readily apparent how many people Jan moved with her commitment to excellence and genuine friendships.

Jan graduated with a degree in Business from UNC-Greensboro, and shortly after in 1983 embarked on a noteworthy career at Hatteras Yachts in High Point, North Carolina, moving with the company to their New Bern facility in the late ’90s. She worked her way through numerous aspects of the company’s operations, taking on roles in marketing, customer service, personnel management and a progression of sales-related positions. Jan’s tenacity & dedication to the company & their customers earned her an appointment as Vice President of Sales. A driving force behind the company’s market dominance during her tenure through the early 2000s, she was ready for the next endeavor.

In 2008, Jan’s proven sales leadership skills were sought out by close friend & Chairman of Jarrett Bay Yacht Sales (JBYS), Randy Ramsey. Not one to back down from a challenge, Jan accepted the position of President amid the worst economic downturn since the Great Depression. While much of the boating industry was left reeling, Jan parlayed her keen business sense and highly respected relationships with the company’s brand leaders & financial partners to point JBYS to safe harbor. Her calculated steps not only navigated the company through these difficult times, she positioned their operations to be revitalized with exponential sales figures as the economy rebounded.

In October of 2012, Jan helped direct the merger between Jarrett Bay Yacht Sales & Bluewater Yacht Sales to form one of the largest new & brokerage yacht sales companies in the world. Continuing in the role of President with the new company’s founding ownership teams of Chris Hall, Sr., Earle Hall & Jud Black from the Bluewater side, and Jarrett Bay’s Randy Ramsey and Dan Reitz, she piloted the company past many milestones. Jan maintained Bluewater’s leading market position while overseeing the sale of new models from 10 world-class brands, guiding over 50 employees in ten East Coast sales locations, and facilitating the sale of thousands of listings valued at hundreds of millions of dollars.

Jan’s battle with cancer was prolonged, but she was a true warrior and continued to push forward leading Bluewater Yacht Sales throughout her treatments. She faced the biggest challenge of her life with strength & courage and has left an indelible mark & incredible legacy which will live on in the hearts of everyone she touched. Jan Boone’s principles, dedication and achievements will endure through the generations of colleagues she mentored and inspired. She is inimitable and will always be remembered for her strong will, work ethic and heart. Our thoughts and prayers go out to Jan’s husband Jerome, daughter Lauren, their family, and countless friends who share in our sadness at this profound loss.