A story posted by Soundings Trade Only Today breaks down all the numbers for sales nationwide for 2013.

Like the stars on a professional sports team, two stalwart categories of aluminum boats and the largest segment of fiberglass boats delivered solidly higher sales in December that enabled the recreational boat industry to finish 2013 with a month of double-digit gains. 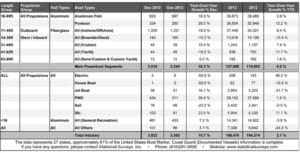 “It’s a great outlook for the industry,” Kloppe said. “We also follow the RV industry and sales there were up 13 to 14 percent in 2013. If we can get that positive momentum going in the boat industry — and we are seeing some of that momentum — I think we can continue to get positive, moderate growth for 2014.”

Kloppe said Statistical Surveys has yet to receive any 2013 sales data from Illinois, which outsourced the production of those numbers, but after a meeting last week the company believes it will have the figures by the end of March.

Sales of 31- to 40-foot cruisers rose by six in December to 45, sales of 41- to 62-foot yachts fell by five to 44 and sales of 63- to 99-foot semicustom and custom yachts were flat at 13. The Coast Guard was up to date in its reports of documented vessels, providing a complete picture of sales in the cruiser and yacht categories.

Sales in all three categories were higher for the year in the early-reporting states, which Kloppe said shows that those segments are healthier than some industry observers had thought.