Project Ireland is approximately twothirds into its three-year build process and no expense has been spared to ensure it becomes the most powerful and impressive custom sportfish ever built. Thoroughly researched, simulated and executed with an owner deeply involved in the engineering process, Project Ireland will feature extensive use of carbon fiber, specialized core material, and other composite technology. This includes a specially designed carbon fiber stringer system, uniquely engineered bulkheads, as well as decks, cabin and bridge composed mostly of carbon fiber to achieve the ultimate strength-to-weight ratio. As Riggs explains, the most exciting part of this project is all the research and development aimed at pushing the envelope, “It’s going to change the way boats are built. We are going to reach and set new boundaries in speed, performance, reliability and safety. It’s not just about top-end speed, but seakeeping and efficiency.” 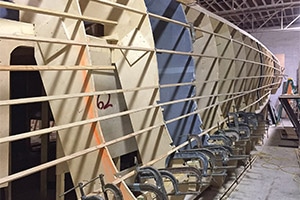 Hundreds of hours have already been logged CAD testing and simulating the boat’s performance among Jarrett Bay’s inhouse design team of Gary Davis, Chad Vorhees and Brandon Davis along with input from a select group of specialists, such as scientists at Materials Science Corporation and Maritime Research Associates. The team then turned to the MARIN Research Institute Netherlands for real-world validation. Jarrett Bay President Randy Ramsey explains, “We’ve worked with MARIN before and they can perform large tank and high speed testing comparable to the U.S. Navy’s proprietary tanks.” Gary Davis explains how a 12’ model of the hull was constructed and tested in what would amount to 9 to 12 foot seas by MARIN this past Spring; conducting three rounds of testing in all so far. “Everything we thought about our design was confirmed, the deflection of the hull, how it moved and behaved, it was all captured with slow motion photography. We could not have been more pleased with how it performed in every sea state.” The second round of testing included operating the model by remote control with full running gear; testing the design of propellers, rudders and struts while simulating performance in tight turns and maneuvers. “It performed flawlessly, even beyond expectations. There were people at MARIN vying for a chance to drive the model each day,” Ramsey adds.

Riggs echoed that the hull and performance tests confirmed the initial computer simulations, and that results were also positive in the third round of testing of additional innovations—which for now will be a closely guarded secret. “There is much more to this build than we can make public at this time,” Davis explains. The team alludes to ground-breaking advancements not only in weight savings and load management, but also in strength and safety; some of the ideas being so revolutionary that Jarrett Bay has applied for several design patents.

“It’s going to change the way boats are built… and set new boundaries in speed, performance, reliability and safety.”

Among the technology that they are at liberty to talk about is the use of lightweight core materials encased in carbon fiber cloth and then resin-infused in a vacuum bagging process. This isn’t unheard of in the art of modern yacht building, but the group says their composite lay-up is unique, down to specific fiber orientations and proprietary core materials. Ramsey notes the engineered prop tunnel design and fuel tank baffles integrated into Project Ireland’s hull as other features found only in a very select group of custom boats. The team’s attention to detail is demonstrated in the smaller things, such as using Alexseal’s new prototype fairing compound, cutting hundreds of pounds from the hull and superstructure weight. Project Ireland is also being designed for certification under the ABS marine yacht classification, which is another series of quality and safety conditions that is said to have never been attempted before in a cold molded sportfish yacht.

Ramsey praised Riggs’ work ethic throughout the build process thus far, acting as an everyday advocate on behalf of both the owner and builder, explaining, “He’s a pleasure to work with. He’s been visiting the facility each week, sometimes for more than a day.” In these visits, Riggs views the 90’s progress first-hand and monitors that everything is on track with the various major milestones and timelines for the owner. The pair of massive 2,600 horsepower MTU engines and a pair of 40kw generators will soon be delivered and everyone is looking forward to starting on the cabin house. Riggs appreciates the professionalism and teamwork he’s experienced at Jarrett Bay, saying, “They are a great group of guys to work with. They have a passion for what they do and it shows from initial engineering on down to the wood workers who are building the boat.”

Riggs reiterates that all the aspects of this yacht—as well as Jarrett Bay’s capabilities— are exceptional. “They were selected for this project because they were the only ones who were willing to build what the owner was dreaming of. That’s what custom boat building is all about. They were enthusiastic about pushing the limits and collaborating with a team of worldwide experts. Jarrett Bay met us with open minds and were eager to learn something new and be able to use that down the road in other products.” As for the experience thus far, Riggs adds, “It’s been super challenging, but also a lot of fun… fun, because everybody is learning. It’s exciting to be part of something that’s never been done before.”