If you were to take a poll, most boaters would agree that Murphy’s Law—stating that anything that can go wrong, will go wrong—always seems to be working harder out on the water. As members of the Jarrett Bay Boatworks’ service department can tell you, they see their fair share of the damage Lady Luck can inflict on even the most prepared mariners. Jarrett Bay’s skilled force of craftsmen are frequently tasked with interesting opportunities to help right what goes wrong, and the following are just a few examples of the issues they have helped remedy over the last year:

View this article in our Summer 2015 issue of OnBoard magazine

In the beginning of 2014, Rameseas, a 56′ Buddy Cannady sport fishing boat sustained a fire at her slip in Wrightsville Beach, North Carolina. Although the fire did not inflict unrecoverable structural damage, it left the boat badly burnt and bruised—all due to a faulty shore power cord. Rameseas was taken to the Jarrett Bay Marine Park where she was tended to by the expert hands of the Jarrett Bay crew and refit specialists. Within weeks, the bulk of the fire damage had been removed and cleaned, and the real assessment of damage and subsequent rebuilding began. Led by project manager Jim McCarley with help from Crystal Coast Interiors and Royale Yacht Finishing, the Rameseas began to look “better than new“ while receiving a few modern touches and boost in appearance with her new Alexseal topcoat. With new primer and paint all-around, complemented by a new bridge canopy and bright work, Rameseas was ready to make her splash in early August. 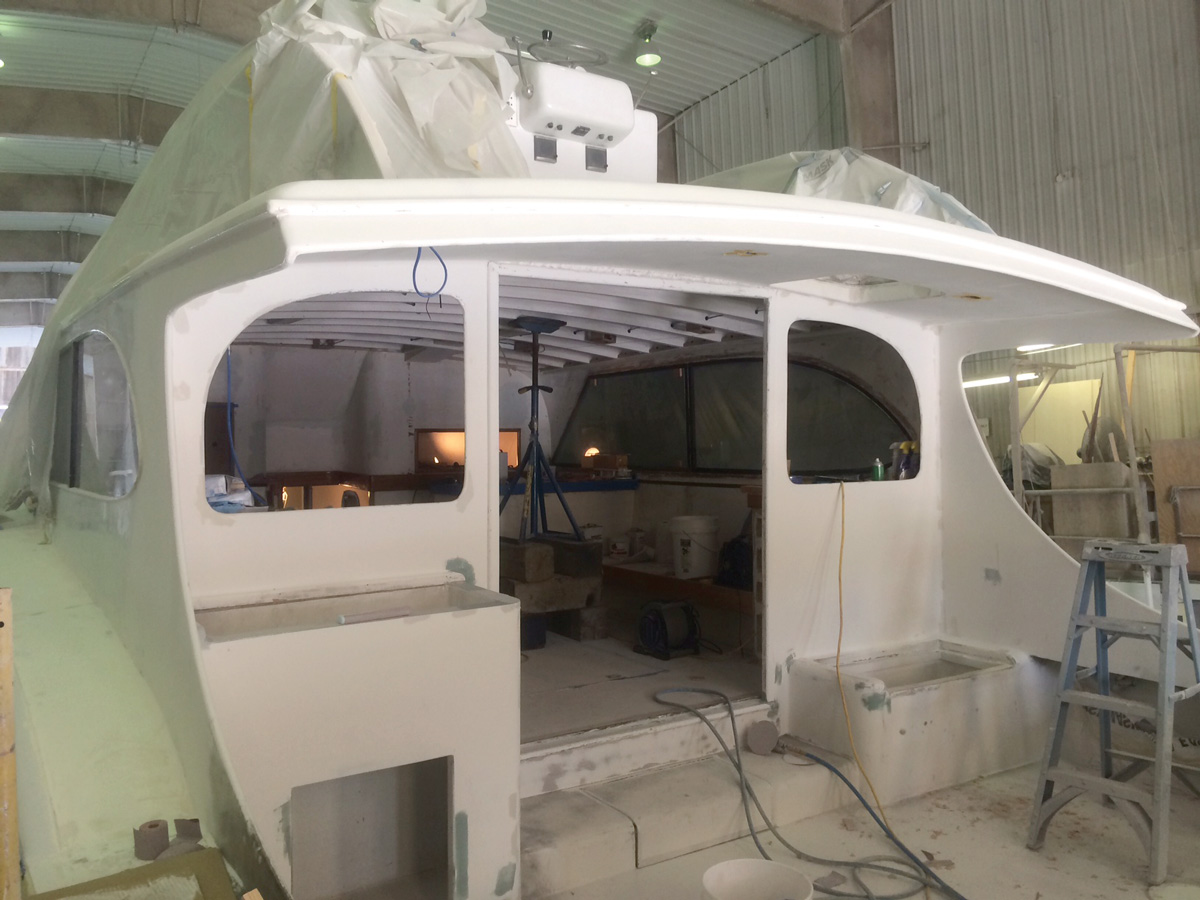 After being absent from the fishing grounds through Spring and most of Summer, the crew aboard Rameseas shined as they eagerly returned to Oregon Inlet during the Pirate Cove Billfish Tournament. Enjoying a Grand Slam one day and ending the week reminiscing of the great weather and excellent catch, the Rameseas crew reported catching 3 blue marlin, 6 white marlin, and 3 sailfish. With results like this, everyone involved is extremely pleased to have Rameseas back on the water doing what she and her crew do best: fighting fish!

Peggy, a 61′ custom sportfish built by Briglia Boatworks recently underwent repairs at the Jarrett Bay Marine Park after striking an unlit marker. With Project Manager Steven Blackwell taking the lead, Peggy was brought back to her original splendor and beauty—leading to some remarkable praise from her owner Doug Abrams,

“I am deeply indebted to Jarrett Bay Boatworks and to Steven Blackwell for the fantastic work on my boat Peggy. As you are aware, my boat hit an unlit channel marker on our way out of Beaufort Inlet during bluefin tuna season. My boat captain, Mike Guthrie, did a superb job in getting the boat safely to Jarrett Bay Boatworks. He called our contact at Jarrett Bay at 5:30 a.m. in the morning and your staff met us at the boatyard with the crane to lift our boat out of the water. If not for your prompt attention, the boat was at risk of sinking in the channel. 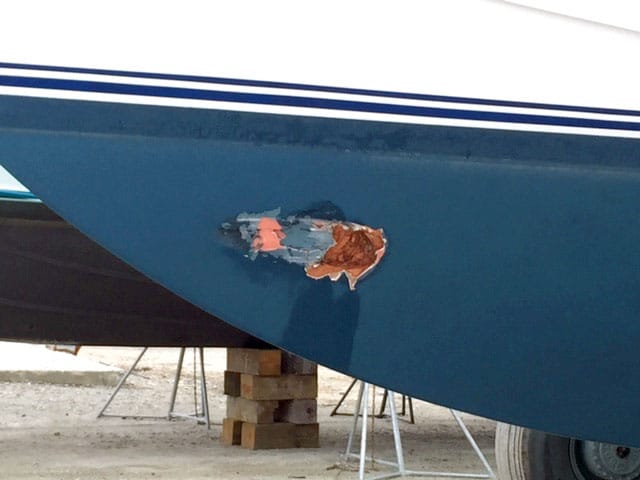 “We also obviously had significant damage to the hull and other areas of the boat. The body work and painting repairs were excellent. Steven Blackwell, as project manager, was a pleasure to deal with and kept me informed through the entire process. I really cannot give you all enough praise for it to be adequate. You have earned your wonderful reputation one boat owner at a time. I truly appreciate the care, diligence, and attention to detail you have shown to my boat and to me.”

While running about 40 miles offshore of Southport, North Carolina on their way to the Big Rock Blue Marlin Tournament, the 66’ Viking, Sand Bob became entangled in a 6” hawser. The crew quickly dove under the boat and cleared the props but noticed that both had been damaged by the thick hawser cable, with the port side being the worse off. In fact, the port side was deemed unusable, so they limped two hours up the coast on one engine to the Jarrett Bay Marine Park.

The vessel arrived at Jarrett Bay in the evening hours on Thursday, June 5th. After haulout, it was determined that both props were damaged as well as both struts and shafts bent inward. One of the props had gone over so far as to cause damage to the fiberglass hull. The decision was made to expedite the repairs over the weekend in order to fish the tournament. The props were removed on Thursday evening and sent to the prop shop. Big Rock Propeller Shop worked through the night and all day Friday to repair the props. 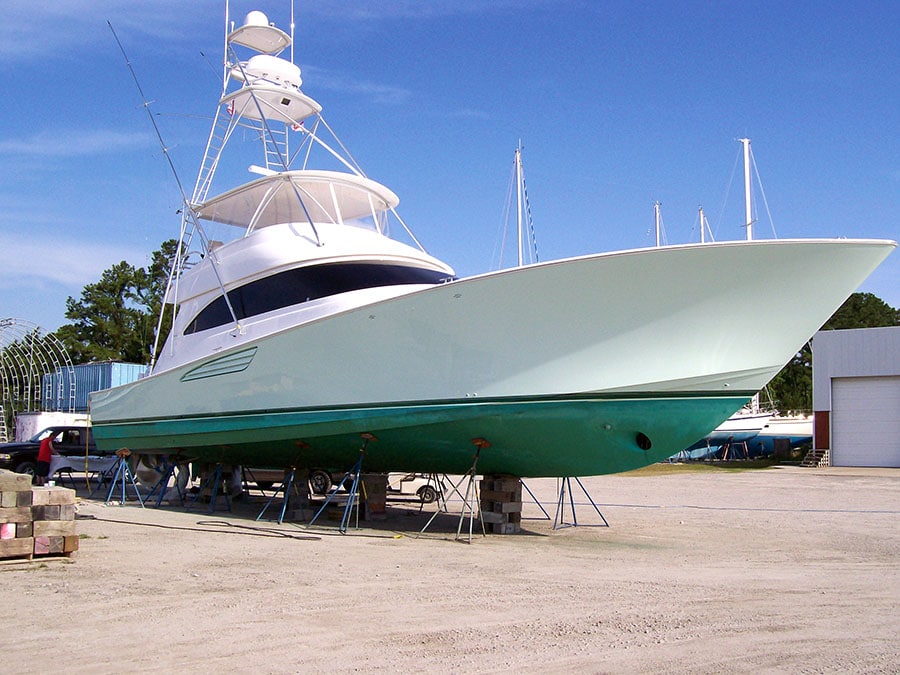 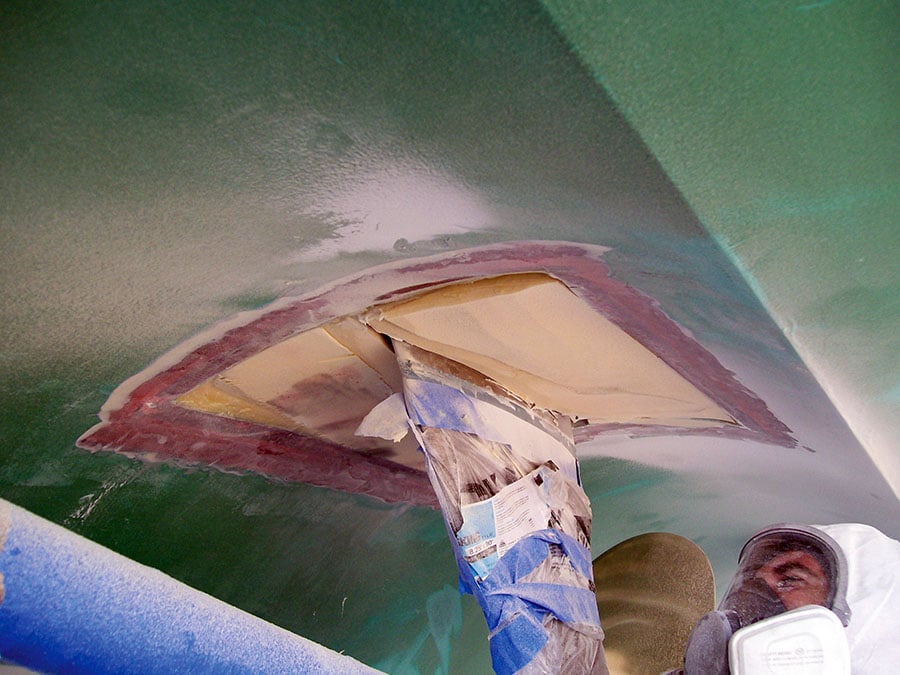 Meanwhile, on Friday morning, the shafts and struts were removed. Bircher Machine received the shafts on Friday afternoon and worked through the night to make the repairs. Arrangements were made directly with the Viking Yachts plant in New Gretna, New Jersey to have two new struts trucked to Jarrett Bay. The new struts arrived at 9:30 p.m. Friday night and were unloaded by waiting personnel. Bircher Machine delivered the repaired shafts on Saturday morning and everything began to go back together.

By mid-afternoon on Saturday, the new struts were in and the shafts and the props were installed. Fiberglass repairs were underway as was the fiberglass fairing over the strut pads. By Sunday afternoon the vessel was ready for launch. The boat was launched at 5:30 p.m. on Sunday for a sea trial, and ultimately the captain reported all was well. A final check of the engine alignment was performed on Monday morning and the boat was ready to fish the Big Rock Tournament.

Hats off to Wesley Clay, Joel Topie and their team members for making the extra effort to make this repair happen over the weekend and in such a short amount of time, in order to prepare Sand Bob and her crew for tournament fishing.

Tuesday June 10th, 2014 was an extra stormy morning for the second day of fishing in the Big Rock Blue Marlin Tournament. Unfortunately one of the participating boats, the 55′ Jarrett Bay Magic Moment was trolling about 60 nautical miles offshore shortly after the lines-in signal, when they were struck by lightning and immediately lost power to their propulsion system. 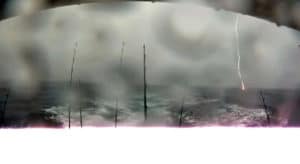 After a few hours drifting and troubleshooting via the tournament radio, Capt. Freddie Willis decided nothing else could be done at sea, and a Morehead City Sea Tow boat was dispatched. The crew fished for mahi mahi as they passed the time waiting for help.

After nearly 15 hours of towing service at about 5 knots, Magic Moment arrived at the Jarrett Bay yard in the early morning hours of Wednesday June 11th. Gregory Poole Caterpillar had their service team poised to help and worked around the clock to help get them back out fishing. 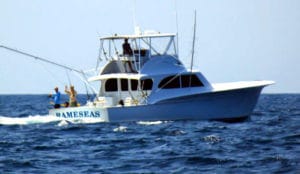 Lightning strikes can do a large variety of damage to a vessel. Magic Moment’s inability to restart their engines was due to the ECMs (engine control modules) being damaged, but other electronics like their VHF and DC system seemed to have survived relatively unscathed. The boat also sustained some serious damage to the generator systems, but Gregory Poole and the other teams of service providers were able to get the vitals repaired quickly enough for them to be out fishing again on Friday morning of the tournament.

All of these stories are a great testament to Bluewater’s network of affiliates and the close-knit collaboration that occurs amongst support teams at Jarrett Bay’s Beaufort service yard.