A young boy playing in the baitwell of his grandfather’s 35’ sportfisher. A long family heritage of fishermen. A father’s passion for catching billfish. A 58’ Jarrett Bay. All this: ingredients for the Richardson family’s sport fishing prowess. Kaleb Richardson is likely to have forgotten about more billfish than you’ve dreamt about. Oh, and did we mention, he’s only 14 years old.

At age seven, Kaleb caught his first billfish—a white marlin. He hasn’t looked back since. Kaleb and his father, Keith Richardson, have an insatiable hunger for catching fish. While most of their targeted species are billfish, their travels recently brought them to Nova Scotia, to experience the famed Bluefin fishery. “The first year Kaleb went up, we got weathered out of all three fishing days,” Keith tells me. The following year, they returned and Kaleb battled four giant tuna. None of which, Keith says, “were under 600 pounds.” While Lafayette, Louisiana is where they call home—the crew of the famous Whoo Dat spends enough time there to knock down a few ducks in the winter, and then it’s off to the next fishing hole. Kaleb has plans to release 500 billfish by the age of 18. With captain Chris Mowad at the helm of their Jarrett Bay, they plan to spend the entire summer fishing the Gulf of Mexico.

See this article in our Summer 2017 issue of OnBoard Magazine

“A lot of people don’t know the value of a cold-molded boat,” Keith says. Spending multiple days offshore is hardly out of the ordinary in the Gulf. So, he continues, “I wanted a boat that I knew would perform if the weather got bad.” Forecasts aside, the climate in the northern Gulf can be volatile in the summer, and they need to expect the unexpected. Keith didn’t want to get beat up if the weather got nasty and they needed to make a 60-mile run to a good edge. Their 2007 Jarrett Bay is tailored for the fishing that the Richardson family does. And they fish a lot. Averaging 1,300 hours on the boat per year, the Whoo Dat fishes as much as most charter boats. It certainly turns heads in the Gulf, seeing a true Carolina boat make a close pass to a rusty oilrig, but she also spends a lot of time fishing the FADs in the Dominican Republic. 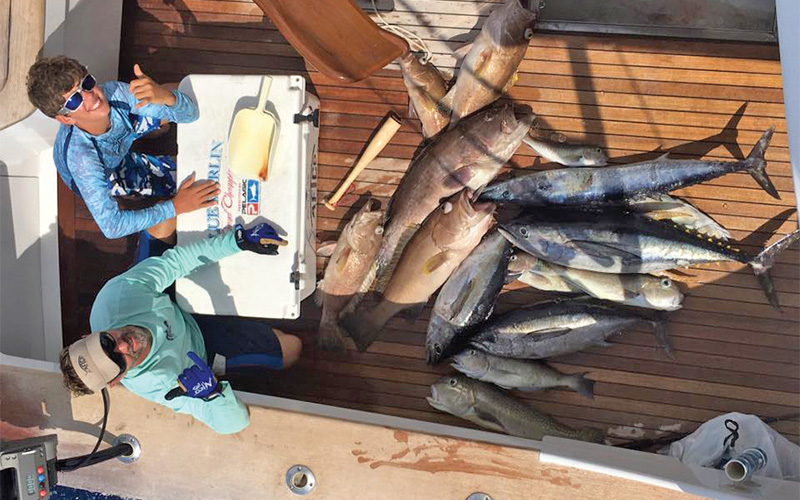 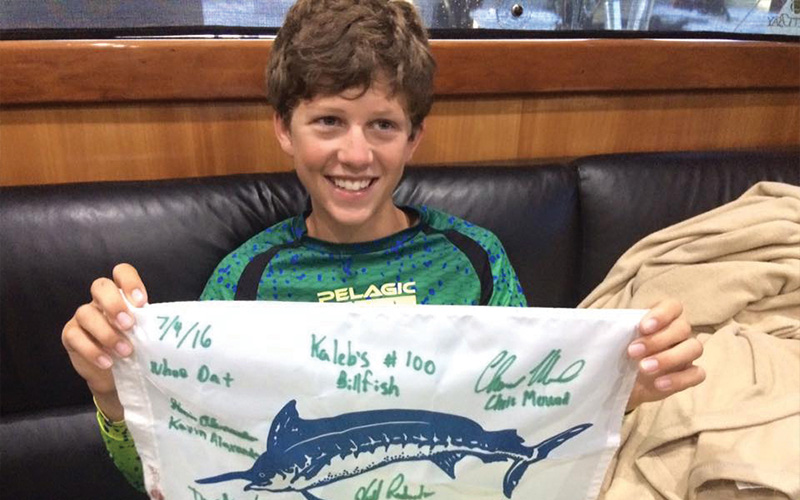 Keith’s father, Glenn Richardson, has a 65’ Viking, Expedition, in Cabo San Lucas, Mexico and is an avid chaser of billfish. In the early years, he and Keith spent weekends together fishing from the beach, catching whatever they could. Then they went to Costa Rica and, “we suddenly felt the desire to catch a lot of billfish,” Keith recalls. At age 20, Keith’s interest in sportfishing grew from weekend warrior to full devotion. In his late thirties, Keith bought his own boat, and he and Kaleb got their toes wet together, so to speak.

Kaleb collects a different kind of trophy than most of his peers. He’s received 12 awards from The Billfish Foundation for accomplishments that run the Junior Angler gamut. “We assigned Kaleb as our designated angler about two years ago,” Keith details. Since then, he’s released an impressive 126 billfish. He’s caught big black marlin in Australia, aggressive blues in Casa de Campo, D.R., finicky whites in the Bahamas, stripeys in Cabo, and sneaky sailfish at home. Duck hunting takes precedence when they are pouring through during winter migration months. Come February, however, the boys gear up for fishing season.

“We suddenly felt the desire to catch a lot of billfish.”

While marlin fishing starts later in year, Kaleb and Keith don’t want to waste any time. They plan to dedicate the entire 2017 season to fishing the Gulf—which, Keith describes, “we’re pretty excited about, because we typically only spend a little time fishing at home.” If you miss the unmistakable Carolina lines, you can identify the Whoo Dat as the boat going in reverse about to release another billfish. One closer to 500.