Lines of Pedigree for a Longtime Viking Yachts Owner

The salty air offshore of Cape May, New Jersey can feel brisk at times, even in the middle of July. Perhaps it’s a welcomed relief to the sun’s heat, or it merely goes unnoticed in the midst of the action as lines tighten, rods begin to flex, voices rise and the excitement grows. Three generations of the Turner family have grown to enjoy sport fishing in these waters and have been recurring participants in venerable Mid-Atlantic tournaments such as the Viking/Ocean Showdown and White Marlin Open for many years. The Turner family enjoys cruising equally as much as fishing, and likes to spend summers in and around Chesapeake Bay when they are not active on the tournament scene. While the boats and crews have changed over the years, the name adorning the transom of owner Richard Turner’s Viking yachts has always been Foolish Pleasure. The name of a derby-winning thoroughbred in the mid 70’s, Turner felt it was a great name for a boat as well, and has stood by that belief for nearly four decades.

Early in his boating career, Turner owned a Bertram 28 before stepping up to a Bertram 35. For his next vessel, he bought the Viking 35 sedan bridge demo at the 1977 Annapolis Boat Show. He was immediately taken by the quality of build and craftsmanship along with the offshore stability and cruising comfort of the boat. Following that first Viking, he moved up to a 43 Motor Yacht, a great boat he said, but ultimately he realized that the style of a sportfisher better suited his family and their boating activities. Their next boat was a Viking 56 Convertible and his run on Viking Yachts has been rounded out more recently by two boats bought via Bluewater Yacht Sales and broker Jud Black, a 61 Enclosed Bridge followed by a 62 Enclosed Bridge delivered in early 2014.

This extensive and loyal history of building and owning new Viking Yachts means Turner has had a uniquely long and personal view of the company’s explosive growth over a majority of their fifty years in business. Mr. Turner considers the Healeys (Viking ownership) extended family and has watched Pat Healey grow from a boy to a leading executive in the company. Likewise, he has had a front row seat while witnessing the Viking plant in New Gretna, New Jersey blossom from a couple of small warehouses to a massive 810,000 square foot operation boasting five assembly lines.

Turner’s long-time Captain, Paul Hannum oversaw construction of their new 62EB from start to finish, with frequent visits to the Viking factory throughout the build time. Hannum recounts the process, “We had a great experience building the new Foolish Pleasure with Viking Yachts. Everyone involved was helpful and brought their years of experience to the table as we added many custom features, some which required additional engineering.”

“I have always been very impressed with the customization options Viking offers. It is like building a custom sportfishing yacht in a third of the time,” Turner adds. His new 62 is outfitted with many custom choices, and to suit his particular accommodation wishes, they opted for a 3 stateroom layout with 3 private heads as opposed to the typical 4 stateroom found on other Viking 62s. He also exercised his preference for cross-over berths in the forward stateroom. Mr. Turner raves about how great the interior designers are at Viking, “I’ve always appreciated the breadth of options available for every surface on the interior.”

In addition to some of the larger changes requested by the Turners, Hannum explains how many small details went into the boat, for example a teak bullnose grab rail which was incorporated into the cabinetry throughout the salon and bridge. They added a gas grill to the cockpit along with a SubZero refrigerator and pull out trash compartment within the flybridge. The berth in the master stateroom was designed and built to be wider and fuller, and there was also a custom cabinet and electrical installed in the master stateroom for a sleep aid oxygen machine. “Although it seemed as if the Viking team had afforded me and this build extra attention because of Mr. Turner’s long history with Viking Yachts,” stated Capt. Hannum, “the reality is that they go the extra mile for all of their clients.”

The Turner’s 2014 Viking 62 receiving her enclosed bridge at the Viking Factory in New Gretna, New Jersey.

In honor of their 50th Anniversary in 2014, the Viking Yachts Key West Challenge was conceived, inviting Viking owners and their vessels to Key West, Florida for four days of food, drinks, fishing and family fun. Having just received hull #62-008, the Turners and Captain Hannum decided it would be a great event to debut the newest iteration of their Foolish Pleasure. Though admitting a steep learning curve in honing their South Florida kite-fishing techniques, they were proud participants of the inaugural event, and hope to make it part of their annual fishing and cruising plans.

During their stay in Key West, Captain Hannum and the Turners spent some time with the owners of Odin, a Viking 61 Enclosed Bridge, much like the former Foolish Pleasure. The new Odin will also be a Viking 62 Enclosed Bridge. As Hannum recalls, “we were all able to share ideas and lessons learned from the building of Foolish Pleasure to the Odin crew. It was a great opportunity for the future owners to get a hands-on look at what they are going to be building.” 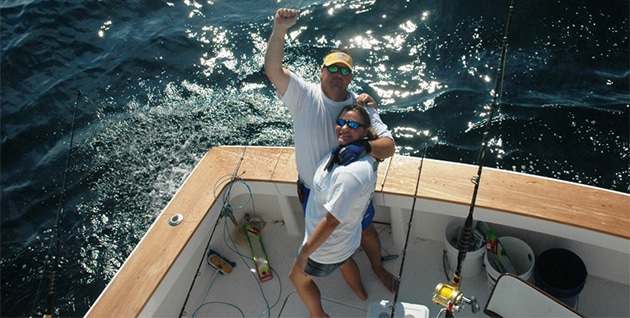 Richard’s son Tim, and granddaughter Alexa pose after releasing Alexa’s first blue marlin. In conjunction with a tuna she caught during the same tournament, the release propelled the Foolish Pleasure team into first place honors at the 2007 Viking/Ocean Showdown.

When the Turners and Hannum took delivery of the new Foolish Pleasure their first stop on the way south was the Bluewater Yachting Center in Hampton, Virginia. As Bluewater Sales Professional Jud Black described it, “They didn’t need a shakedown cruise, as Capt. Hannum knew they had a safety net of Bluewater locations to stop at should any trouble arise.” While at the Bluewater Yachting Center, they enjoyed an overnight stay and a delicious crab cake dinner at the award winning Surf Rider Restaurant on-site. Hannum reported the boat performed exceptionally on her maiden voyage, despite less than favorable weather, “It was on this leg of the trip that we discovered some similarities and differences between the new 62 and the old 61 Viking. Both boats provide a very seaworthy feel and comfortable ride, but in the conditions we faced, the new hull design provided a drier ride and much more efficient performance,” he recounted.

Their new 62’ Enclosed Bridge is equipped with Caterpillar C-32s with ACERT, cranking out 1,925 horsepower each. Both Turner and the Captain agree that it is a fantastic package. Hannum boasts, “she is fast, efficient and nimble for her size. Acceleration is smooth and effortless, while turning, docking and backing down are very predictable.” Hannum has run numerous boat brands with different power plants, and he comfortably admits that they all have issues and malfunctions from time to time. He continues, “What sets Viking and Cat apart is support you can rely on when something goes wrong. The Viking team is always available to help provide assistance wherever you are and Caterpillar has service providers and outlets in most places worldwide.”

Captain Hannum and the Turners have a core group of Cat professionals that they can call upon day or night and get help to keep them running smoothly. The team feels fortunate when a recommended hourly engine service on the Foolish Pleasure coincides at a time when the boat is already in the Delaware/New Jersey area and they are able to utilize the local services of their long-time trusted Caterpillar dealer, and Viking partner, Ransome Cat. When asked about power throughout all of the vessels he’s owned, Mr. Turner answered more assuredly than any other question: “Cat.”

Turner has been rather outspoken in his support and recommendation of their engines and service, and confirms Hannum’s beliefs that maintenance intervals are very reasonable and Caterpillar’s Extended Service Coverage plans are superior offerings. As with all of his Viking yachts owned to-date, Turner plans to use his new 62EB at least through the life of his 10 year Cat warranty before even considering moving on to another boat. Given his impressive ownership history, that sounds like a wise and experience-driven decision.

The Turner’s third Viking: a 56 Convertible.