Being at the head of the line can have its advantages and disadvantages. For example, some people really don’t enjoy the thrill of riding at the front of a roller coaster and seeing the next crazy bend or loop. To the contrary, beating the queue at the post office or DMV can be a highly regarded accomplishment! Most of us can recall our childhood and the first kid on the block to get those trendy new pair of kicks or the hottest toy of the season. To that end, Jack Taylor is definitely a man who enjoys being at the forefront of what’s available in the world of motor vehicles, both on land and at sea.

An auto dealership owner by day, Taylor’s relationship with Bluewater Yacht Sales and specifically salesman Jud Black, has spanned nearly a quarter century and has encompassed a handful of boats from both the Viking and Regulator brands, among others. Throughout that time Taylor has been near the top of the waiting list for several new models, including his 1990 Viking 43, the all-new Viking 55 in 1997 and the Viking 61C in 1999. In addition to this impressive sequence of Viking yachts, Taylor has more recently worked his way up the Regulator line-up, purchasing a 23, 26 and most recently, a 34 equipped with twin Yamaha 350s.

Now he has once again stepped forward as one of the first customers to plunk down a deposit on Regulator’s newest and biggest build to date: their recently announced 41 footer. “To his credit, Mr. Taylor told us when he bought his 34, that if Regulator were to build a bigger boat, he would be first in line to get his hands on it,” recounts Jud Black. Regulator management was obviously listening and even approached Mr. Taylor for input on the new design, sending several engineers to pay him a visit and get feedback on exactly how he uses his current Regulator, as well as other large center consoles he has owned. Taylor wouldn’t tell you that he had a hand in designing the all-new 41, but he is pleased that the Regulator team sought his input while developing their offerings for the boats’ standard features, options and creature comforts. 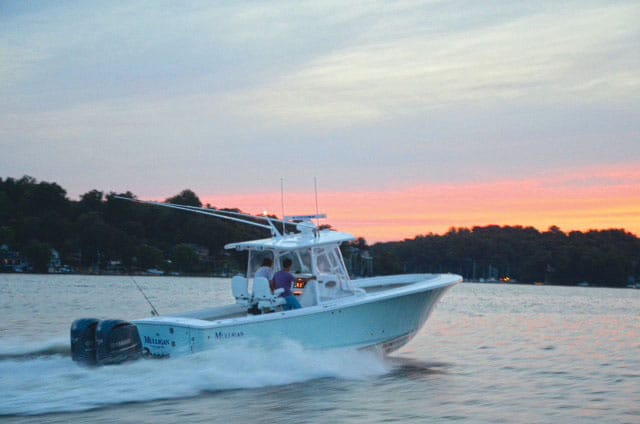 Having owned three Viking models over the course of twenty years, one may be tempted to ask Taylor for his best fishing stories, but the truth is Jack Taylor is a cruising man, “Ten minutes after dropping a bait in the water, I’m bored out of my mind.” Taylor’s son John on the other hand, developed a great thirst for the sport and has enjoyed taking their many Viking and Regulator boats out fishing through the years, catching rockfish, marlin and sailfish a-plenty. John also fishes regularly in several mid-Atlantic tournaments such as the Ocean City Tuna Tournament.

Living on the Severn River in Maryland, Jack enjoys being out on his boats often, cruising around the Chesapeake Bay area to Annapolis, St. Michaels, Kent Narrows and other areas. Often entertaining groups of friends and family on cruises to nearby waterfront restaurants, he has a deep appreciation for the stability and speed of his Regulator boats and applauds their strength and smooth ride, regardless of the sea conditions. Taylor’s anticipation for the launch of the 41 is easy to recognize and he says he looks forward to his chance to assess the first completed hull, “Given her quad Yamahas and new controls, I can’t wait to see the speed and visibility out of the hole, as well as its maneuverability.“ Taylor does not yet have any experience with Yamaha’s Helm Master system, which will come standard on the new 41, so his impending sea trial will be an exciting first foray into the joystick technology.

41 411: What to Expect
In speaking further with Joan Maxwell, President at Regulator Marine, she explained that the 41 has been in the planning stages for nearly two years. “We spent a lot of time learning what our customers and prospects like and don’t like in some of their boats in this class and have worked hard to incorporate very specific feedback into this new design.” In addition to discussions with end-users, the Regulator team contacted several dealers and representatives including Bluewater’s Jud Black for input during the planning stages. Maxwell commented, “Jud has always been a great sounding board and is a pleasure to work with.” 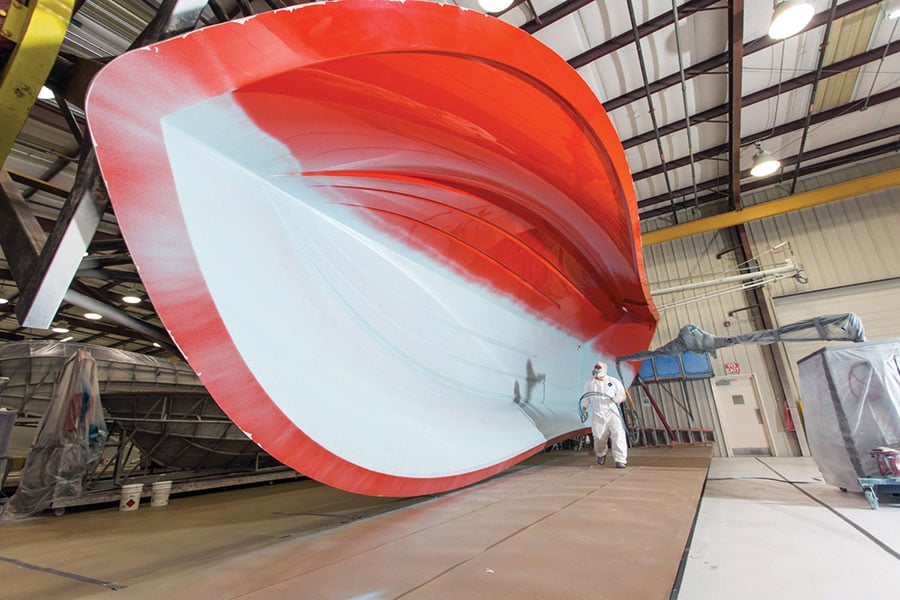 So what makes the new 41 different? First and foremost, she’ll be one of the few production center consoles in her class offering triple and quad outboard power options. Being the largest and most complex model ever built at Regulator, the 41 will start out in a limited production capacity until initial sea trials can be performed on hull #1. Maxwell points out this will be a first on many fronts for them, including the separate galley, berth, fully enclosed stand-up head, and storage spaces all accessed by a beautifully designed curved console door. Some of the possible customizations will include t-top or tower options as well as custom hull colors beyond their standard compliment of gelcoat choices.

As aforementioned, Taylor’s eagerness for the newest and greatest rides does not stop at boats… He recently took delivery of his new Mercedes-Maybach S600, the newest flagship model for Mercedes-Benz that has just started delivering stateside. It seems Taylor’s hunger for new innovations is focused not only on cutting edge releases, but on companies with a strong heritage and reputation for luxury and quality. From the likes of Mercedes-Benz and Viking Yachts to Regulator Marine and Bluewater Yacht Sales; the brain trusts of great, long-lived corporations will always be appreciated by discerning customers, with aficionados such as Taylor always leading the way.