The Miami International Boat Show is taking its luxury yachts and crush of customers and setting sail from Miami Beach for a new home farther south on Biscayne Bay.

Starting in 2016 and running through at least 2017, the Boat Show will be hosted outside the abandoned waterfront concrete hulk where speedboats once zoomed and pop superstars crooned. Boat Show representatives declined to answer questions Tuesday about its future beyond 2017, but sources with knowledge of the agreement say the event — one of South Florida’s largest tourist draws — could remain at the venue long-term and play a key role in the financing of a $30 million renovation of the dilapidated stadium.

“Calling Miami Marine Stadium a home in 2016 and 2017 unites two of the City’s most celebrated boating institutions and solidifies Miami’s place on the map as an international boating destination,” said Thom Dammrich, president of the National Marine Manufacturers Association, which runs the show.

Details of the arrangement are still in flux. But it’s close enough to fruition that stadium booster Gloria Estefan and Miami City officials plan to cruise over to the stadium Thursday morning on a yacht to officially announce the deal. Dammrich is also expected to release further details, as questions linger over whether the show will return to Miami Beach, where renovations to the city’s convention center all but forced the show’s relocation.

“We have not been told anything yet by the boat show about whether they’re leaving or they’re staying,” said Max Sklar, Miami Beach’s director of tourism and culture. 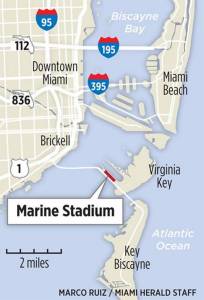 What seems more concrete for the time being is that come 2016, for the first time in more than 20 years, tourists will flock to the Marine Stadium for a major event. The boat-show announcement is a major boost to the long-running campaign to renovate and reopen the city-owned stadium, which, though closed after Hurricane Andrew in 1992, is now widely regarded as an architectural and engineering jewel with no match in the world.

Supporters say the deal confirms the project’s viability, and will help nail down a long-term operating contract with the city and rope in big donors who have been on the fence about committing.

“This is absolutely wonderful news,” said architect Jorge Hernandez, co-founder of Friends of Miami Marine Stadium, the nonprofit group running the restoration project. “Had we heard five years ago that the Miami International Boat Show show would be coming to this site, we would have thought, no, this is too much of a Disney ending. But it’s like the glass slipper. There is no better fit for the site.’’

Under an agreement with the city, the Friends organization has until January to show successful fundraising and a viable operating plan in order to secure a long-term lease. The group must persuade city officials that the stadium, a perennial money-loser when open, can be managed without public subsidies.

City Manager Daniel Alfonso said his staff is still reviewing the group’s finances, and there remain some issues with “cash flow.” But Hernandez and architect Hilario Candela, the stadium’s designer, say Friends of Miami Marine Stadium has fulfilled conditions and they’re asking the city to approve the lease as soon Nov. 20.

The Friends group, which estimates the stadium renovation will cost around $30 million, has secured $15 million in commitments, including a $1 million State of Florida grant and $3 million from a longstanding historic-preservation commitment from a Miami-Dade County bond program.

A third of that $15 million will come from the sale of historic-preservation tax credits to people who use them to offset federal tax liabilities, Hernandez said. Estefan, who performed at the stadium with Miami Sound Machine and is serving as the face of the campaign, has pledged $500,000.

The boat show will also bring in significant money, but the precise amount has not been determined, and Hernandez and Candela said they were not ready to provide a figure on Tuesday. Sklar said the show netted the Miami Beach Convention Center $680,000 last year.

The boat show would mostly use the area now occupied by the stadium’s vast asphalt parking lots, which under a 2010 master plan approved by the city commission are to be converted into a tree-lined park equipped to stage special events, Hernandez said. Like most of the shows run by the National Marine Manufacturers Association, it would take place in tents and other temporary structures similar to those erected for Miami Art Week, Hernandez said.

Some boat-show exhibits would occupy a minimal portion of the water basin in front of the stadium property, but Candela and Hernandez stressed those would be positioned so as not to interfere with public use of the water, popular with rowers and paddlers.

Once a lease with the city is signed, they said, the money already in hand is enough to start ripping out the asphalt, installing utilities and planting grass and trees. The park would be ready for the 2016 boat show, the first scheduled for the marine stadium property, but the stadium renovation would not be finished by then, they said.

“The master plan was about keeping Virginia Key as green and open as possible, and everything that we’re doing is according to that plan,’’ Candela said.

The master plan also makes space for a modest marine-exhibition building, but that would come in a future phase.

The Miami Commission will need to approve a new lease. But the new deal has the support of Miami Mayor Tomás Regalado, who has made stadium renovations a priority under his tenure.

“They’ve done a monumental task by raising that kind of money and having that kind of support,” said Regalado. “It looked like a dream four years ago but I think it’s becoming a reality.”