A story posted by Soundings Trade Only Today provides a glimpse of an improving marine sales market.

The long winter undoubtedly impacted boat sales, but data reveal the strongest first quarter since at least 2010, with sales that slightly outpaced those in 2012, a year characterized by a mild winter and early spring.

First-quarter sales on a three-month rolling basis this year significantly outperformed those in 2013, a year that also brought cold weather in many parts of the country well into spring months, Info-Link Technologies managing director Jack Ellis told Trade Only Today.

The data are based on new-boat registrations and are from Info-Link’s Bellwether states, which the company says are geographically dispersed and represent about half of the U.S. boat market. 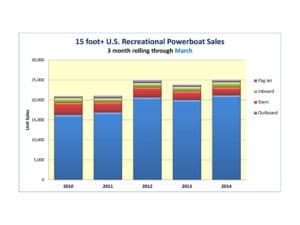 “If you recall, early 2012 saw a really mild late winter and early spring and had rising sales,” Ellis said. “So last year, people were like, ‘What’s happening? Sales are down,’ but last year was a terrible winter that dragged out and they were comparing it to a great early spring and late winter the year prior. Yet this year, the winter is even worse and sales are about equal to where they were in 2012, when everyone was saying, ‘Rah rah, rah, look at how boat sales are going, and it’s still only the first quarter.’ ”

About a third of first-quarter sales always occur in warm-weather states such as Florida, Louisiana and Texas, Ellis said.

“All those places are doing well,” he said. “What that tells me is that though there is probably going to be a bit of a lag in the Northern states, states that are not cold are doing pretty well. So hopefully when we come out the other end, in April or May, it will pick up again.”

Boat sales in the first quarter account for 18 percent of the year’s overall sales, Ellis said, which means the data come as good news.

“We still have 82 percent of the year to go,” Ellis said. “Despite a really harsh winter, we’re doing just as well as in 2012 when there was a really warm summer and early spring.”