When your perfect boat is going on 10 years old, and the boat show is in town, merely setting foot on the dock is a risky undertaking. Calculated risks however, can prove to yield great reward, and so Jerry Taylor and Nancy Bryant took to the docks. Though very much in love with their 61 Viking Enclosed Bridge Convertible, the cruising couple wondered if the time might be right to build their dream anew. It was there in Ft. Lauderdale where the first of many conversations took place with Earle Hall of Bluewater Yacht Sales and Pat Healey of Viking Yachts. The topic however, was not a first—this would be their fifth Viking.

Their years aboard those boats included countless Bahamian sunsets and starry nights anchored in coves reserved for those willing to stray a bit off the beaten path. Jerry and Nancy stray as often as possible and learned in due course a great deal about the best ways for them to do so. Seasoned cruisers are the ones who have learned by doing—and doing without—in out of the way places that demand skills and ingenuity honed to prevent or prepare for whatever may come. 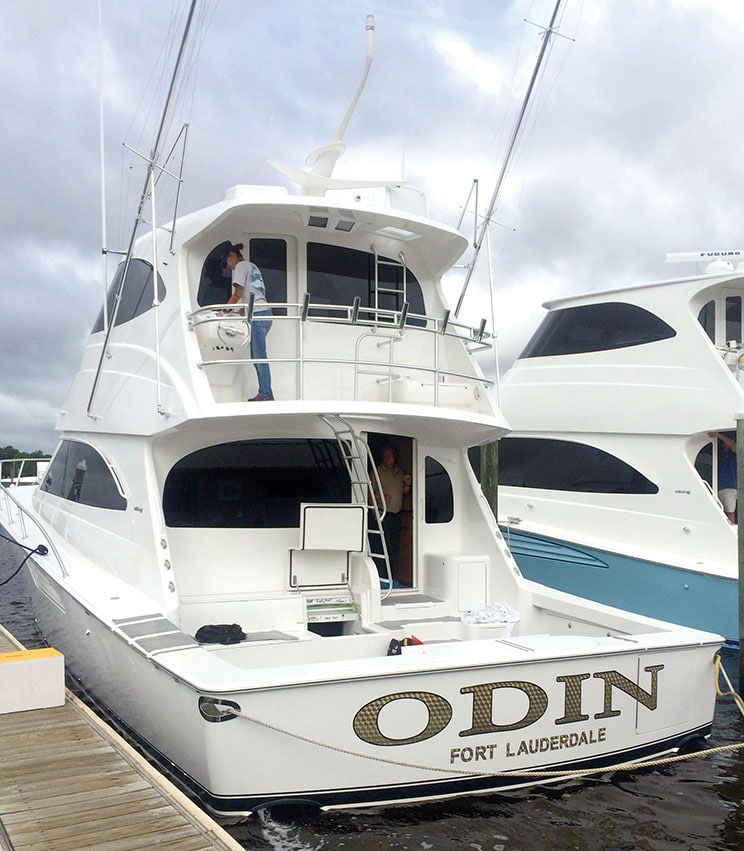 The boat itself is often the only refuge and must provide solutions in-hand and on the fly. The combination of home, workshop and playground requires thoughtful planning and design. Taylor and Bryant know exactly how a boat needs to be set-up to fit them and their needs. The 61 had been it for nine wonderful years, but the lure of a newer platform, updated technology and zero hours was tantalizing. 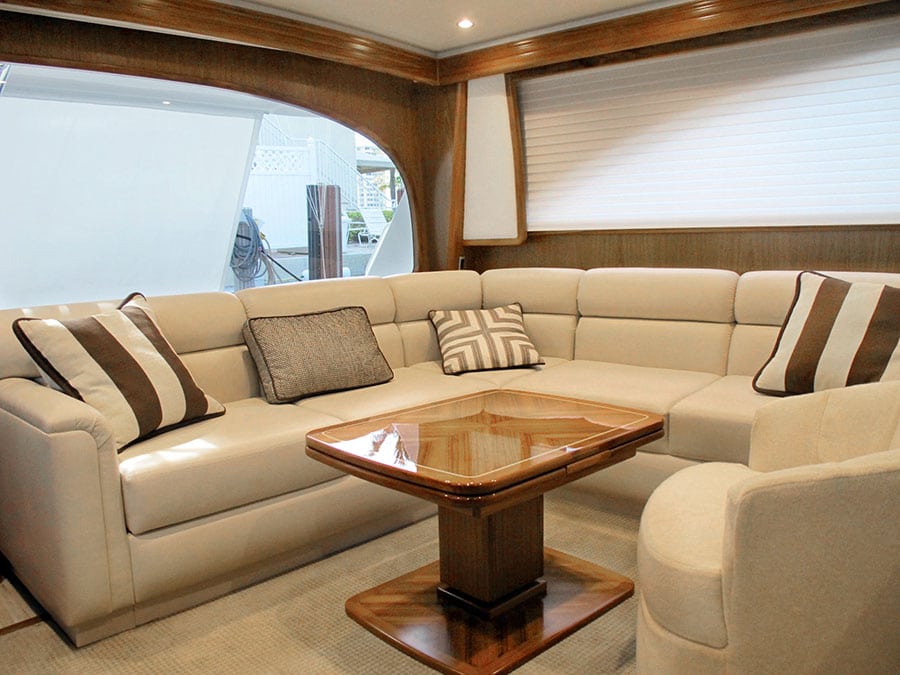 Although the interior of the Viking 66 promised more room and comfort, as a couple who prefers cruising without crew, the ease of managing a shorter boat and its ability to get in some of the smaller marinas was a high priority. As Jerry Taylor put it with a chuckle, “The trick is to get more boat inside, without making it bigger outside.” They sea-trialed the 62 Convertible but then took a look at another 66. Earle Hall remembered the moment, “Things really started percolating when they saw this new 66 with a stairway which was custom built—it made us think that maybe we could make some wholesale changes to get them what they wanted. The visual was a good reminder that Viking is pretty good at doing just that.”

For Taylor and Bryant the desire to keep the boat under the target 65 feet warred with three primary issues they saw in the salon layout of the 62. “The number one for us was that the spiral staircase to the enclosed bridge was too close to the galley counter and blocked the space directly in front of the entryway. Second was that the salon itself was smaller than on our 61. The third was the traverse angle from starboard side entry to portside companionway.” Jerry gives most of the credit to his wife whose artistic eye objected to the loss of flow from entryway to companionway, which to the unimpeded eye gives a sense of space and makes the boat look longer than it is. “She really pushed the idea that the design could be better.”

Earle Hall listened to their points and understood their reasoning. Prior to scheduling a visit to the Viking plant, he discussed most of them with Pat Healey. “By the time we were ready to sit at the table with Viking, Jerry and Nancy were pretty sure they were going to buy a new boat—but the 66 would have been more boat than they wanted, and the 62 just didn’t quite fit. We needed to talk to Viking and see what could work.”

Taking it to the Team

Viking was ready for them. In a manner that has become customary in their 50 years of building boats, the conversations that took place at the boat show, on the sea trial and over the phone sparked more conversation at the plant. When Pat Healey led Jerry, Nancy and Earle into the conference room, he had a drawing of a possible new layout for the 62 already in hand. Vice President of Sales Joe Schwab recounts the lead-up, “Because of the way they use a boat, we started making modifications as we went through their list—it became obvious that the best layout would be to essentially flip the design, swapping sides for some of the elements. That’s where we started.” 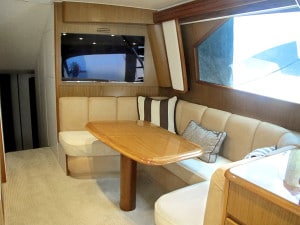 On paper or in the mind’s eye, the concept of swapping sides may seem like a fairly straightforward process. Both Jerry and Nancy knew well otherwise, as Jerry put it, “you don’t just move the furniture around.” The reality would mean a great deal of re-engineering and mechanical alterations including the shifting of fuel tanks, bilge systems, venting, intakes, generators—the works, down to the smallest detail. “Something as simple as the hinge on a medicine chest door having to be flipped such that it swings out from the bow-side so as to not open in a seaway—everything had to be revisited,” stated Earle.

In previous builds, Jerry and Nancy had made some requests for a few custom modifications. But they had never asked for anything of this scope. Having been through the process before, they had a solid understanding of both the merits and limitations of the Viking production line. Jerry revisited his thoughts going in to the first meeting: “We had never asked this much of them before, so we didn’t know what to expect—we even thought they might say, ‘no.’ Instead we got this enthusiastic response from Pat and the designers and the sense that they were already inclined in this direction.” 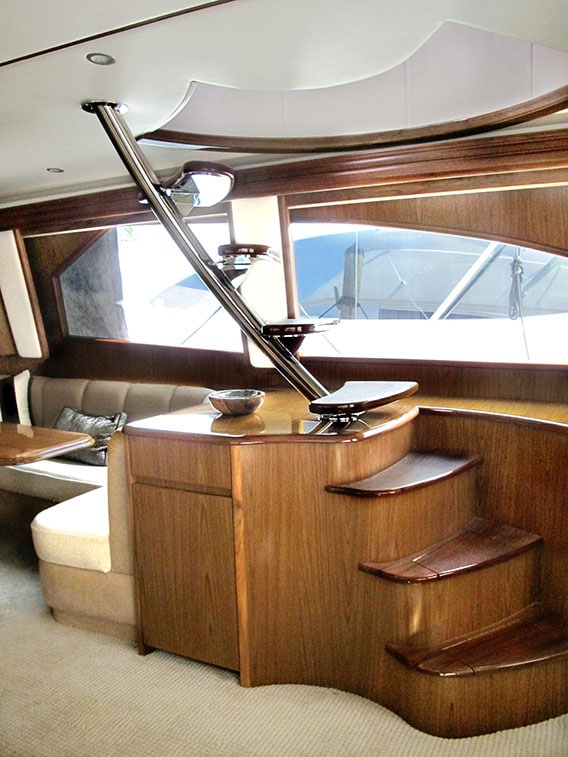 The ultimate plan included the complete removal of the spiral staircase and access moved to the starboard side. A custom designed stairwell with the first three steps cut into a customized credenza would arc gently inward on a central stainless column with teak steps up to the enclosed bridge. To increase the room, interior walls and bulkheads were shifted two inches in three different places for a net shift of 6 inches to maintain proportions. The galley was flipped to the port side, opening up the view from entry to the companionway below. The pop-up flat-screen was moved from the previous version of the credenza to a wall mount over the dinette, angled so that it would be viewable from anywhere in the salon. Additional pullouts were added behind the mirrored galley storage. A spice-rack cabinet was added to the outside galley counter and a storage area opened up behind the dinette TV in the companionway.

In addition to all of the alterations done to accommodate the salon changes, Viking agreed to modify the engine room layout to suit the Taylor’s boating style. Room was made to allow for dive tank storage, the installation of an air compressor as well as a Seakeeper gyrostabilizer, watermaker and icemaker. Much like a puzzle, placement of engine room components were adjusted in the most efficient and logical utilization of space across the board, right down to the relocation of the Racor

Watching it Come Together

With a finalized design and a plan in place, production was scheduled. “One of the amazing aspects of Viking production is their ability to sit down at the start and create a schedule complete with specific milestones that occur within a day or two of the original,” comments Taylor. “Even with the customizations we incorporated, we could see the entire project from start to finish and know what was happening, and when.” This kind of production planning keeps the entire line humming in tune and on time. Jerry and Nancy along with Earle were able to schedule plant visits with Keith Monahan who would be the project manager on the new Odin. The visits were coordinated with various milestones such that the two could verbalize their vision of the new or modified elements directly with the carpenters.

“The carpenters at Viking are pretty terrific. Our input consisted of describing the effect we wanted to get out of a particular element. Then they made it look like art,” Jerry enthused. The couple both describe the custom cabinetry in glowing terms and Nancy specifically refers to the new staircase as sculpture. “Everyone involved in production is extremely talented. 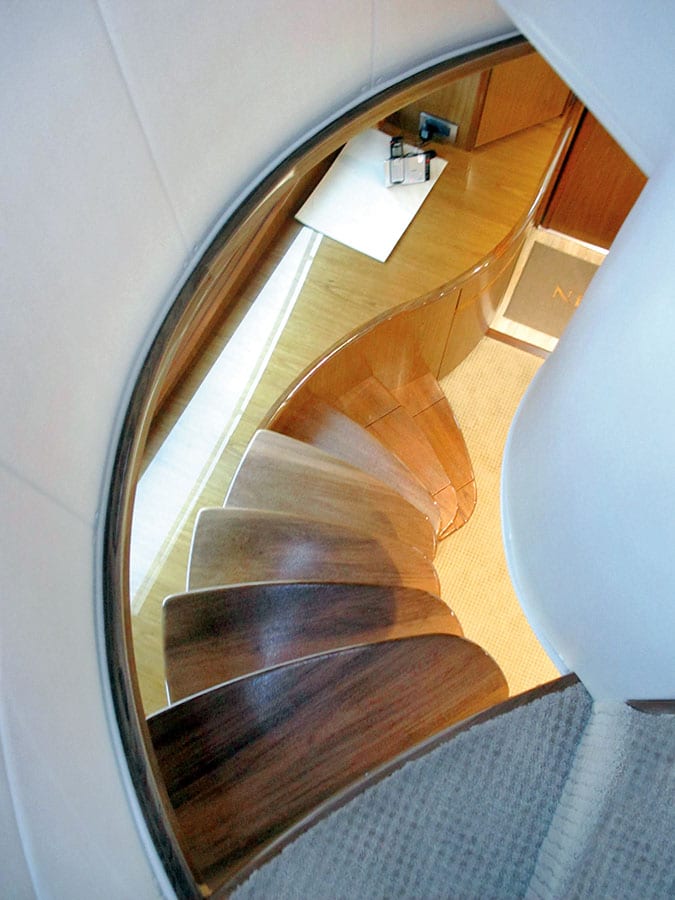 The outcome is stunning.” When asked his favorite aspect of the production process Jerry thought briefly and then described witnessing the line action: various “pieces” of the boat would sit alongside like flotsam, awaiting the boat’s arrival; then one could watch the pieces be installed and really start to see the boat come together. On the opposite end of the spectrum, when asked what was the most nerve-wracking part, Jerry explained, “Wondering if the enlargement of the salon would crunch up the rest of the boat. We really sweated that—and no, it doesn’t. It’s perfect.”

It may be safe to say that the designers and engineers at Viking would not have let that happen. Earle Hall consistently praises the scope of talent and experience across all departments at Viking Yachts. “The best part of being involved in a project of this scope is the interaction of Viking staff from all levels and divisions—from the integral skills of the engineering and design staff to the experienced production teams. The quality of the entire team at Viking means a willingness to consider alternate ideas, which can only improve the end product.”

The admiration was mutual as both Joe Schwab and Project Manager Keith Monahan stressed the importance of communication and how well Earle along with Jerry and Nancy made themselves available to answer questions or consider options. “The beauty of working with knowledgeable customers like Jerry and Nancy is that they fully appreciate the whole process,” states Schwab. “They understand the quality of information we need from them and are reasonable in their expectations. They might challenge us, but they wouldn’t ask for the ridiculous.”

One could speculate that the company’s tendency to embrace challenge, engage their customers and then incorporate the best results is a recipe for success. Jerry Taylor and Nancy Bryant repeatedly express being satisfied beyond their wildest expectations. “We absolutely loved our 61 and were aboard for many years. The new Odin is so much more than an update; it is a very different boat—faster and with greater capabilities. We really made the right decision.” And Viking made it a work of art.