Seakeeper Dominates Roll on the Water

A decade ago, the phrase “Gyro Stabilization” would have baffled most people, including the mariners this new technology was intended for. However, at the time, there was a small team of researchers and great thinkers putting in thousands of hours developing what is becoming more widely known today as the Seakeeper. A Seakeeper uses gyro stabilization technology to greatly reduce the roll of a vessel by over 90% in some instances. 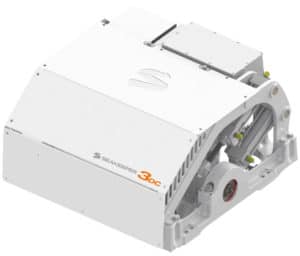 A gyro stabilizer – without falling into a physics-intensive explanation – is basically a finely machined flywheel spinning at a high rate of speed within a vacuum. This flywheel desires nothing but to maintain its own momentum and axis. When the force of a wave hitting the starboard or port side of a boat threatens to upset the flywheel, opposing forces are delivered which helps to drastically counteract the potential of that wave. With some sophisticated microchips and electric motors, the Seakeeper gyro stabilizer reduces roll efficiently and quickly in multiple directions.

Rather than just making a simple claim of roll reduction, Seakeeper has tested dozens of boats from several manufacturers in varying sea conditions and collected all of the data, both with the Seakeeper disabled and enabled to compare the mighty strength and determination of that little high-speed flywheel inside the unit. A 2005 Viking 61 Convertible equipped with a pair of Seakeeper’s was tested in moderate chop off the coast of Fort Lauderdale and returned an impressive 92% roll reduction during the trial.

Even more remarkable is this video of a 2015 Regulator 34 equipped with a full tower and a single Seakeeper 3DC.

A side-by-side comparison shows just how impressive this new technology is in reducing roll. How much roll? This Regulator 34 with triple Yamaha F300 engines saw a 94% reduction in roll. Impressive data for a day when no boat of this size should be on the water. The sea conditions included a small craft advisory, a gale warning and winds recorded at 20-26 knots!

With 6 different models to choose from, and installations ranging from mid-size center console fishing boats to superyachts exceeding 200 feet in length, Seakeeper has quickly made a name for themselves in the marine stabilization market, and dozens of manufacturers and custom boat builders are now adding Seakeeper to their new build options list. Currently, all 3 custom builds in progress at Jarrett Bay Boatworks are Seakeeper equipped boats as it is becoming well-known that these new gyro stabilizers offer the best in offshore comfort, whether cruising or on the hook. 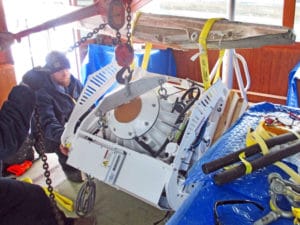 Bluewater is proud to partner with Seakeeper and we boast several factory-trained technicians who are skilled in the installation of Seakeeper units on motoryachts and sportfish alike. All of Bluewater’s featured new model brands along with our three world-class service centers install Seakeeper as an option. Bluewater is strongly urging their friends and clients to check that box on the new boat order form for a Seakeeper gyro stabilizer – not just from reported data and testing, but personal experience. And if you are not ready to move up from your current boat, let the professionals at Bluewater upgrade your ride with the remarkable stability offered by a Seakeeper gyro.