A BITE TO REMEMBER

The Jaruco sport fishing team is quickly becoming one of game fishing’s most prominent teams, fishing the Los Sueños Signature Triple Crown Series the last two years and placing sixth overall in the 2016 tourney. Composed of three legs of three days of fishing in January, February and March, the Signature Series attracts many of billfishing’s top teams to Costa Rican waters teeming with Pacific sailfish and marlin. This year, the nine days of competition saw an astonishing 6,570 billfish released between approximately 45 teams per leg and Jaruco recorded a number of impressive milestones along the way. 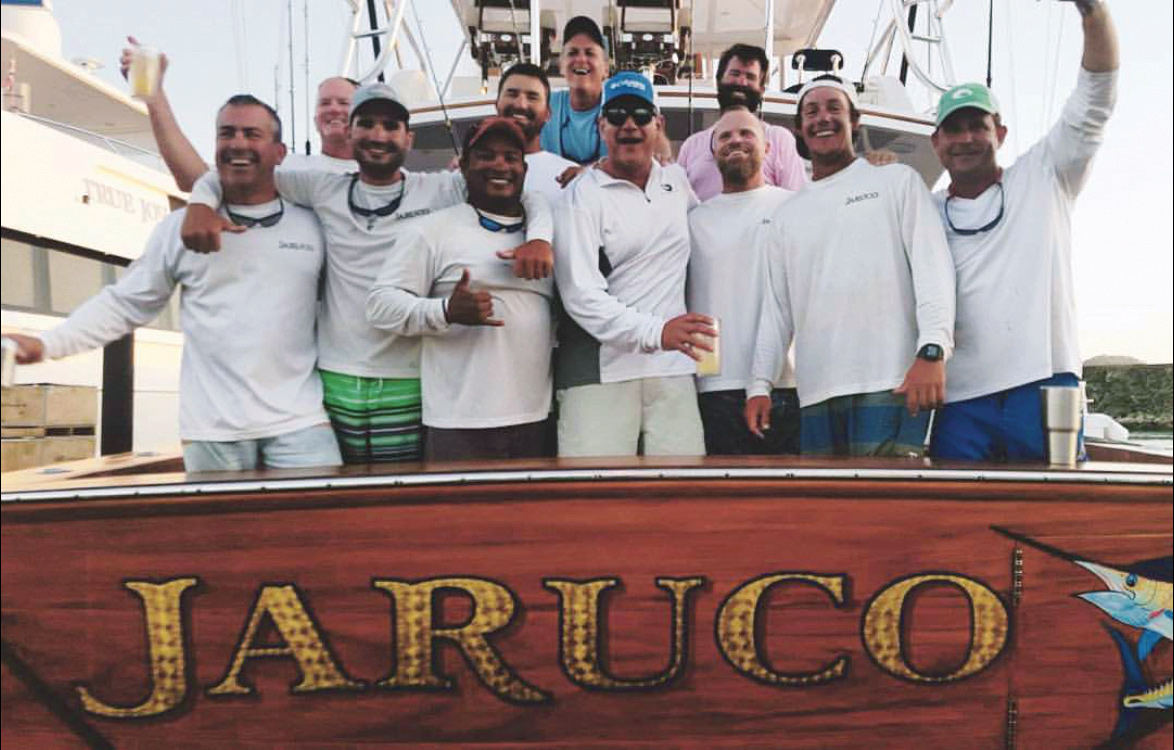 They booked a day with not one, but two, quintuple headers, successfully hooking up and releasing five sailfish at the same time (twice)! The team sat in fifth place overall entering the third leg, but with other teams seeing similar big numbers, they ultimately weren’t able to improve that position—despite winning the daily with 43 sailfish releases on the last day of the tournament. That just goes to show the quality of this fishery and how uber competitive the Triple Crown Series is. Further demonstrating their abilities, the Jaruco released eighty—you read that right, EIGHTY—sailfish on a day of recreational fishing which put the exclamation point on their 2016 Costa Rica season.

Captain Tyler Andresen has been leading the Jaruco team since 2012 when the owner bought a pre-owned 78’ Garlington with the help of Bluewater’s John D Riggs. Andresen and Riggs then helped oversee a huge refit project on the boat, including a repower, installation of three Seakeeper gyros, and many other major upgrades in 2014/15. Around the same time, the owner decided to purchase a 68’ Weaver specifically to fish Costa Rica while the Garlington acted as their larger fishing platform back stateside. John D was able to fish with the team during the Los Sueños tournament the past two years, and attributes their huge accomplishments to Capt. Tyler and the team’s overall ability and hard work. Renowned marine artist, Steve Goione was also able to fish with the boat this season and he and Riggs both reported that they’ve never experienced such epic fishing in all their days.

Riggs explains that for such a campaign to be successful (especially a large, twoboat program such as Jaruco’s), support is paramount. “Being there when the phone rings is everything. We’ve basically got four full-time guys with two big rigs to handle. Getting parts and equipment to Central America can be a challenge at times.” It’s a challenge that the team and Andresen appear to have met, as the Weaver has now returned to North Carolina via transport ship to undergo routine maintenance at Jarrett Bay before heading north for the owner’s summer plans and eventually returning to Costa Rica again next winter. With a new custom build under way to replace the Garlington, and such ambitious dreams already being realized with the help of Riggs and Bluewater, you can expect to hear a lot more from team Jaruco in the future.

Renowned marine artist, Steve Goione was also able to fish with the boat this season and he and Riggs both reported that they’ve never experienced such epic fishing in all their days.