From a recent article out of Sea Magazine -a western United States based boating magazine- comes this in-depth look at the stunning Sabre 42 Salon Express.

A couples boat with a penchant for performance

The name of the yacht side-tied across the fairway — the one our boat’s pulpit came agonizingly close to as we left the slip — was Sea Flat. While that is likely an homage to someone musical in the owner’s family, or maybe the owner, it was an appropriate name for the water conditions on San Diego Bay on a picture-perfect Tuesday.

I was with Jeff Brown of JK3 Yachts to test the Sabre 42 Salon Express. The model line is almost up to hull #80, but recent alterations have changed the yacht’s layout from the salon settees to the cockpit. Brown showed an expert hand getting the boat out of its slip in tight conditions. It looked like we were inches from the aforementioned Sea Flat and from the end of the slip, but Brown used the Zeus joystick to maneuver the nearly 46-foot-LOA yacht safely into the fairway and out of the marina. While the LOA in the Sabre literature is listed at 41 feet, that measurement doesn’t include the bow pulpit and the swim step, and believe me, the extra footage from those features mattered during departure and return.

The Sweet Spot
Once we got clear of the no-wake zone, we pushed the throttles forward. As we settled in to a nice cruise speed of 23.2 knots, right at 2500 rpm, we were burning about 23 gph (that’s a combined reading from the twin Cummins QSB6.7 380 hp diesels), which yields about 1 mpg. With a 10 percent buffer built in, that yields a range of about 350 miles. Even when we cranked the throttles all the way forward, fuel efficiency was still pretty good. We hit a top speed of 32 knots (31 was consistent), at which point the Cummins engine display, which provides engine data, tank levels, alarms and other information, told us we were burning from 34 to 38 gph. Not bad. At 16.1 knots, the twin Cummins were burning a combined 18.2 gph.

Agility-wise, the 42 Salon Express proved to be more nimble than its lobster-boat styling might lead one to believe. I took it into a hard-over turn to port at cruise speed, about 23 knots, and the boat never strained while cutting a nice tight circle. When I pulled the wheel to starboard, the vessel responded quickly and smoothly — no flopping from one extreme heading to the other, or at least what I thought was one extreme to the other. When I was done with the maneuver, Brown said, “Let me show you something.” I handed him the wheel, and he proceeded to run the 42 up to top speed and pull an even tighter turn than I had. Seriously, I think the circle he created put us in about as tight a spot as we’d had to exit at the slip. While you probably won’t need that agility during a harbor cruise or a leisurely trip to Catalina, it’s a nice feature to have for the one time you’ll come to need it.

What a View
As an excellent dayboat and coastal cruiser, the Sabre 42 is always going to be in places with a lot of scenery around it, and the designers decided the folks in the boat should be able to see every panorama and vista. Windows surround the captain and passengers. In fact, if you’re a fan of fiberglass walls in the main cabin, this probably isn’t the boat for you. From the triple-pane windshield to the large side windows to the aft expanse of glass — two windows and a glass door all in stainless steel frames — the message is plain: look outside, people.

From the captain’s chair, there is 360-degree visibility, and the side windows come down to the top of the port and starboard settees, so it’s easy for passengers to watch the world go by while they are seated and enjoying a snack or a beverage.

In addition to the view, all those windows provide something else: a cure for stuffiness. The aft section of both side windows opens, as do two hatches in the hardtop and a door beside the helm. In addition, the two aft windows, one to each side of the door, roll down. In a bit of inspired design, instead of swinging out (most likely up) and being secured to the roof overhang, the windows actually disappear into the bulkhead, like rolling down the window in a car. No chance they work loose and slam down or catch an unsuspecting tall passenger with a hard corner. With everything open, a steady crosswind is assured while underway, and even at rest a slight breeze will move cooling air through the cabin. 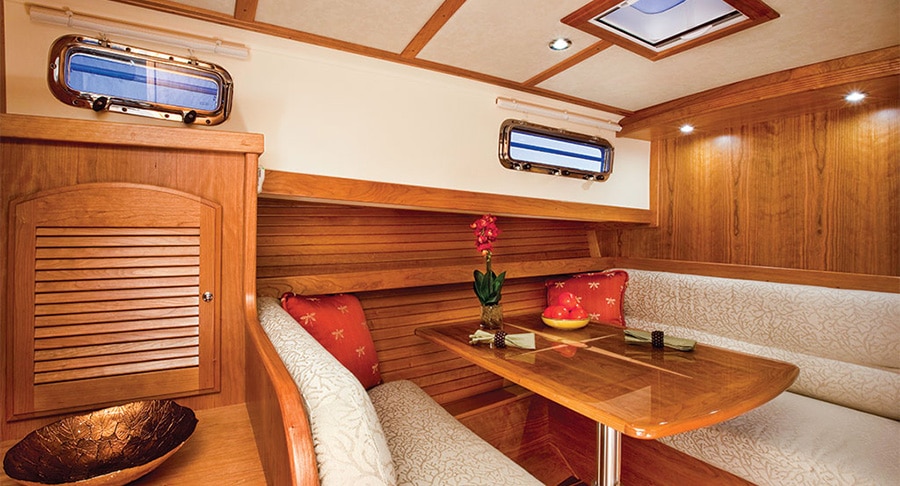 Owners Will Love
Sabre yachts are built in Maine and have been since 1970, so anyone looking for an American-built boat will like that fact. And while the boats look fairly traditional, they’re built in a modern factory by skilled workers. “Sabre really combines innovative, modern features with a traditional quality of workmanship,” Brown said, “and that creates a pretty compelling package.”

Within that compelling package are features that make the 42 a couples boat, but one that gives owners the option to host overnight guests. The master stateroom is forward and has in-room access to the head. To starboard at the foot of the stairs is a second stateroom that can double as a second dining area, as it does on our test boat, though it can be designed as a stateroom only. Both staterooms have overhead hatches and portlights.

Since this will be used as a dayboat, the cockpit is an important spot, and the 42’s aft deck won’t disappoint. It has seating for six on an L-shaped settee aft, which has an oval table, and a two-person bench settee against the cabin bulkhead that faces aft. To starboard of the entry door is room for one more seat, but our test boat has the optional barbecue grill, which is definitely the way to go. When the aft windows are down and the door open, the six guests in the cockpit can converse with the eight or so folks on the salon’s two settees and twin captain’s chairs. (There is a flybridge version of the 42, which loses the grill/seat in favor of a ladder to the bridge.)

Brown called the 42 a low-stress yacht, and I think the Zeus pods probably have the most to do with that. They make docking and low-speed maneuvering as simple as operating a joystick, and the Skyhook station-keeping function holds the boat in place using GPS while you’re waiting at a drawbridge or in line at the fuel dock or if you have to check something below quickly. The other stress reducer is the low noise level. Sabre tests found 77 decibels to be the highest onboard reading at wide-open throttle, and I would wager heavily that the reading is lower than that at the helm. A trip to Catalina or the Gulf Islands doesn’t have to be an assault on one’s ears.

Don’t Overlook
Sometimes it’s the little touches that stay with you after seeing a yacht, and the Sabre 42 provides some of those. A hatch in the galley sole — a beautiful burlwood — lifts to reveal a storage space, including two stainless drawers that can hold cooking utensils, knives, measuring cups, etc., and are accessible from the galley. The sidedecks and entire foredeck are covered in a deep nonskid surface that should grip in any conditions. I didn’t ask, but the combined woodworking experience of the Sabre crew must be many, many decades, because the cherry interior is beautiful. While it would be an exaggeration to say there are no right angles on the boat, it’s fair to say the interior is softened by the generous use of rounded corners. Window frames, ceiling molding and furniture all get the rounded-corner treatment.

As we were bringing the newly redesigned and updated Sabre 42 back to the marina, I spied a different boat at the Shelter Island Harbor Police Dock, clearing customs back into the U.S.: Janabanana. Check out the story on page 20 of this issue to read about its adventures in Mexico. No matter how tight the fit back at the slip, it was a piece of cake compared to Janabanana’s troubles, and Brown guided the boat back into its home expertly. When I stepped to the dock, I noticed the flag-blue hull really stood out, even among larger vessels, and it was the day after Memorial Day, so that was an observation that stuck. Another reason to like the 42. 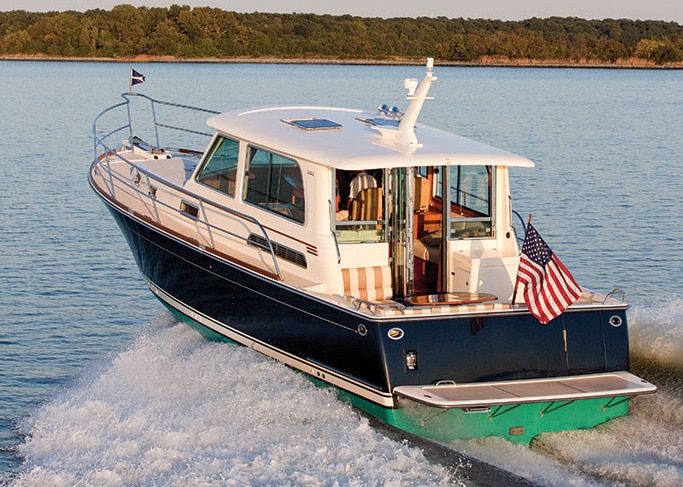