In a report released by Trade Only Today summarizing the final sales results for brokerage boats in the United States throughout 2014, December was the only month that showed an increase of sales over corresponding months in 2013 – up by 6%. However, total brokerage sales for the year are down by 5%, although selling price among all but superyachts increased by 2% over 2013. The full article follows: 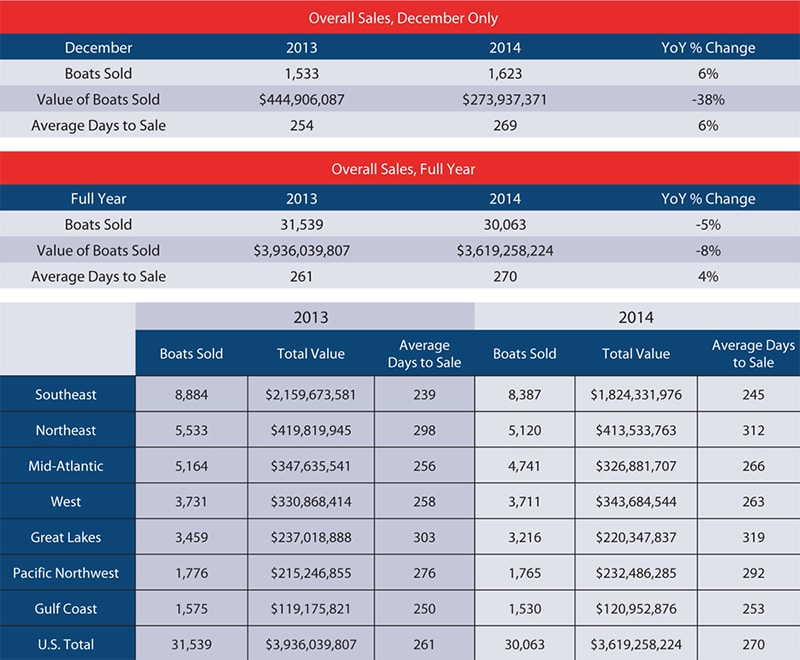 2014 ended with a 6 percent gain in U.S. brokerage sales in December, but the year’s headlines were not positive. Sales for the year were down 5 percent, according to YachtWorld member brokerages reporting in their proprietary database, SoldBoats.com.

Leaving aside the superyacht sector, the rest of the market was down 5 percent for the year in volume, but the price of all boats sold increased by 2 percent, from $2.71 billion to $2.77 billion — a gain of about $60 million.

Stronger sales of larger yachts boosted the total dollars exchanged, especially among boats from 56 to 79 feet, a segment in which sales climbed from 725 to 769 boats and the total value increased by $38 million, to $525 million. In the 36-to-45-foot range, the total value increased by $21 million, even though the number of boats sold was roughly level with 2013, indicating an improvement in average sold pricing.

By region, brokers in the Southeast sold the most boats in 2014 — 8,387 — and the aggregate price paid was nearly half of the dollars that changed hands in the U.S. brokerage market because of the size of the boats sold. Sales were down by nearly 500 boats in the region, and the total price paid was lower by $335 million than in 2013, by far the biggest decline among regions and largely attributable to the slide in superyacht sales values.

Northeast and Mid-Atlantic brokerages sold about 400 fewer boats in each region, but remained the No. 2 and No. 3 regions nationally. The West, at No. 4, countered the East Coast trend, with sales figures down only 20 boats and the total value up $13 million. Similar results were recorded in the Pacific Northwest, the No. 6 region, with sales virtually level and values up by $17 million.

Brokerage sales on the Great Lakes, the No. 5 region, declined by 15 percent, or nearly 250 boats, and the total value was off by $17 million. On the Gulf Coast, which does not include the Gulf section of Florida, sales were down just 3 percent and the total price paid was up by $2 million.

Average times to sell a brokerage boat rose in every region in 2014, with a national average increase of nine days, to 270. Southeast brokerages remained the quickest at turning listings into sales, at 245 days. The seasonal regions of the Northeast and Great Lakes finished the year with the highest averages, 312 and 319, respectively.