“Tell me about your boat name” can be a great ice breaker for boaters getting to know one another, and is in fact how we set out in getting acquainted with Eric Olson after he took delivery of his beautiful new 2015 Viking 42 Express. When asked about the origin of the Surf Rider name, he relayed a somewhat unexpected story.

The roots of the name don’t flow from a former life as a surfer as one might expect, but go back over seven years to a custom built Judge 33 which Olson purchased from a gentleman by the name of Stanley Bennett. Bennet was a former law enforcement officer who was injured while on duty. When he retired early from the force, he used his savings to reignite his mother’s business and passion—Surf Rider restaurant. Their efforts were highly successful and have evolved into a grouping of seven restaurants well renowned throughout the Chesapeake, including one located on premises at Bluewater Yachting Center in Hampton. Naturally, as owner of the Judge 33, Bennett named it Surf Rider, in homage to his successful restaurant chain. While preparing to buy the boat from Bennett, Olson had grown to like the name so much that he asked if he could keep it and Bennett happily granted him permission. 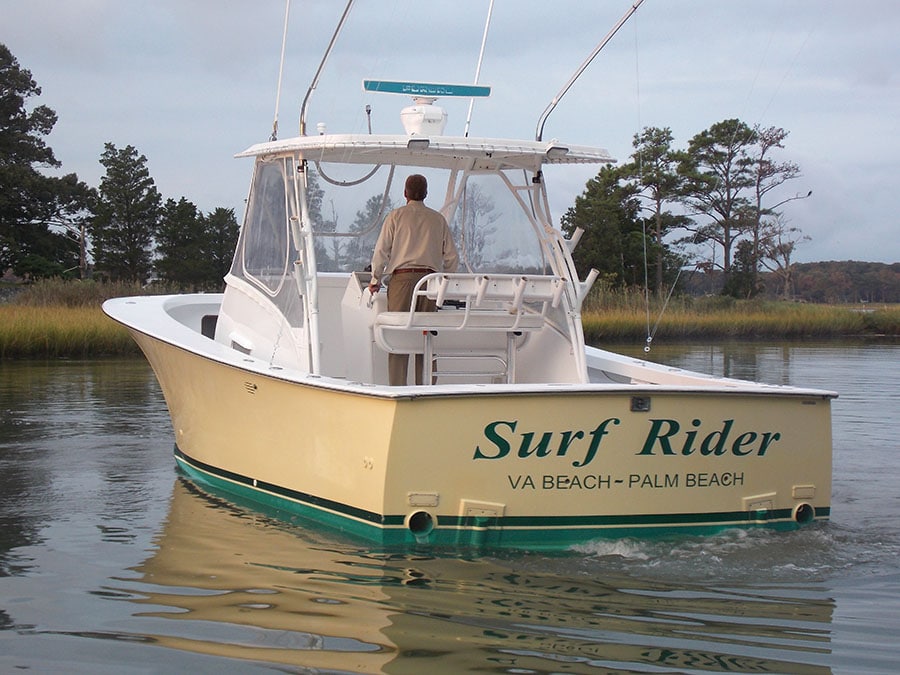 During the first seven years that Olson owned this original Surf Rider he developed a relationship with Bluewater Yacht Sales and worked with team members in the Hampton office during the purchase of a 2006 Viking 56. Once again, not wanting to mess up a good thing, Olson asked the previous owner of the Viking 56 if he could retain the name of the boat after it changed hands. A resounding “Yes” was again the response, and so for over 3 years, Episode was owned and operated by Olson along with his Surf Rider.

Olson makes every attempt to escape the slip daily on one of his boats, exclaiming during our morning meeting, “I just took her out to dinner last night!” He made it clear he enjoys the freedom of being able to quickly shove off and make these trips single-handedly, without the assistance of a mate or crew. This desire no doubt contributed to Olson’s decision to sell Episode in 2012 and once again he sought the assistance of Bluewater Yacht Sales to do so. 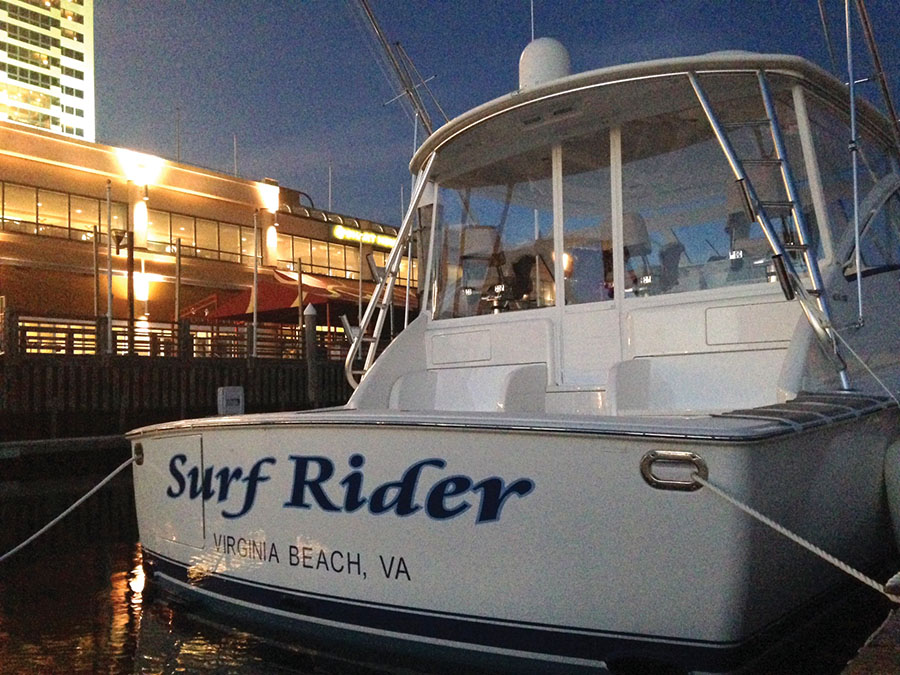 Olson then began his search for a new boat—one that landed somewhere in the middle of the size spectrum between that of his existing Judge 33 and former Viking 56. He wanted to captain the boat himself, but still have ample space for guests aboard. Like identifying the “slot” when fishing for stripers, redfish or snook, his next boat would need to meet just the right measurements to be considered a keeper. Very much impressed with the quality and accommodations of his Viking 56, Olson kept a watchful eye on the development of the company’s smaller models, particularly the Viking 42. He contacted Bluewater’s Scott James, a man Olson met many years ago and would run into somewhat regularly at boat shows. The two had a friendship going long before James came to Bluewater Yacht Sales and once Olson knew he was in the market for a new Viking, he did not hesitate to call upon James’ expertise.

His next boat would need to meet just the right measurements to be considered a keeper. 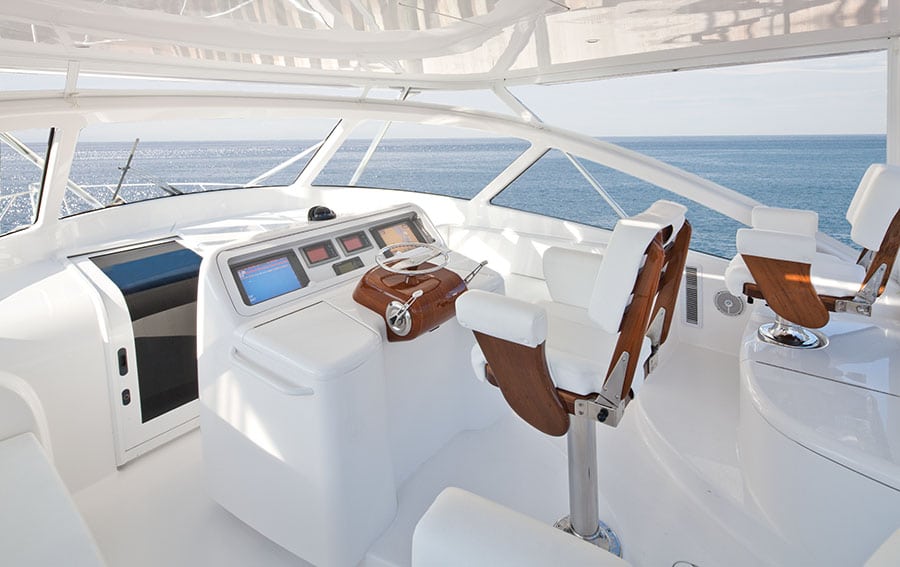 The successful acquisition of Olson’s 2015 Viking 42 was not without a few twists and turns. In looking at the model, Olson knew he did not want a tower due to the extra height, weight and controls involved that he did not intend to utilize much. But most of the new inventory around the country at the time was already outfitted with towers and commissioning a new build from scratch could cause him to miss some significant boating time. Keeping a vigilance, the two spotted a Viking 42 which had just exited the factory in New Gretna, NJ.

She was already shrink-wrapped and preparing to depart for South Florida to receive a tower and final finishes before going on display at a boat show. Olson and James leaped on the opportunity, and immediately began dealings with Viking and the Healeys to purchase this particular boat rather than letting it head to Florida for outfitting.

Surely preferring not to scramble their demo plans for the boat show, negotiations with Viking were not without their snags. At one juncture it seemed the deal was about to go south, both metaphorically and literally, but Bluewater’s Jan Boone stepped in and was able to help right the boat’s course towards Olson. Boone’s actions and determination and James’ dedication to all parties helped solidify what Olson already knew: “Bluewater Yacht Sales is a great company with outstanding values and they stand behind their customers.” Olson recalls nothing but smooth sailing once the deal was in place, “the delivery date for my new Viking was dead-on.”

With the deal done, he was once again tasked with the decision of naming his new acquisition. Unlike his prior two pre-owned boats, he had a clean slate to work with, however he couldn’t imagine owning a boat not named Surf Rider. Once again he approached Bennett to ask if he could use the name on his new Viking. Bennett was honored and flattered by the request and without hesitation agreed that Olson could carry on the legacy. 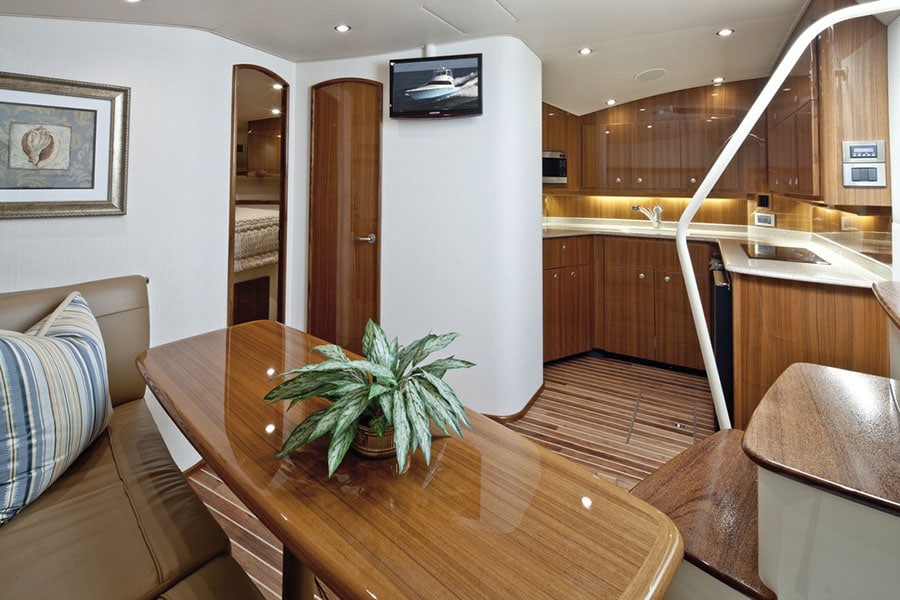 Mere days after taking delivery of the new Surf Rider, Olson embarked on a three day trip to Annapolis, reporting, “she ran 30 knots up and 30 knots back effortlessly.” Not only is the boat fast, smooth and economical, he also likes the maneuverability and precise control that the pod drives provide, “She’ll go wherever you point her.” He admitted a slight learning curve in moving from a conventional shaft-propelled boat to the pods, but reported that he overcame the joystick’s sensitivity quickly. The visibility afforded by the open air cockpit is superb and making it easy to visualize his approach to unfamiliar docks or negotiate tight spaces. 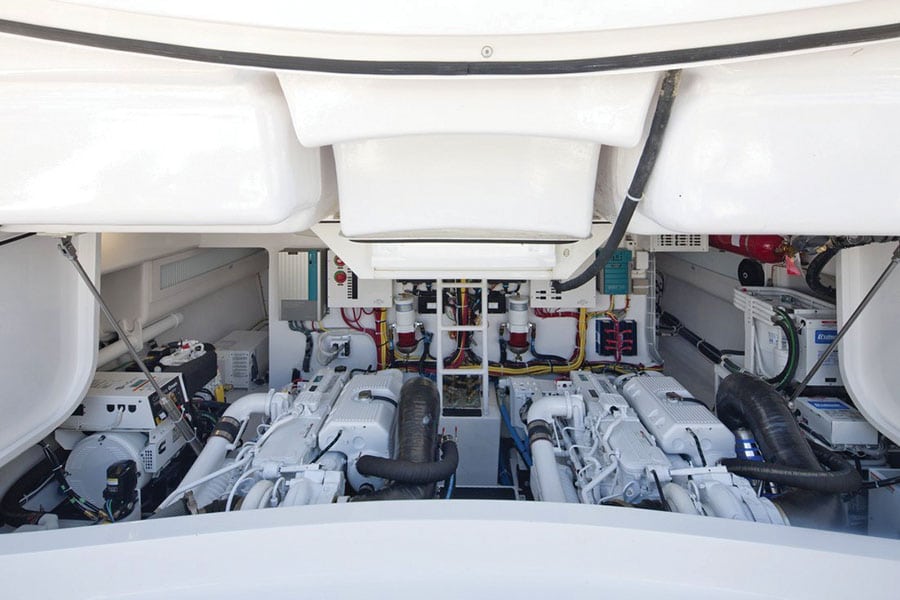 Olson is certainly an individual who enjoys cruising, but it doesn’t necessarily define him. His summers are also filled with some fishing adventures off the continental shelf where he enjoys filling the box with tuna and mahi mahi and releasing the occasional marlin. He is however looking forward to taking some more extended cruising forays aboard the new Surf Rider. The next big adventure will be a trip from home base in Virginia to Venice, Florida on the Gulf Coast. He plans to make use of the Okeechobee Waterway to save time and fuel, but there should still be ample opportunity to stop and fish or enjoy a few waterfront restaurants and destinations along the way.

When asked what features he might consider in a future boat Olson explains, “I wouldn’t want to go any larger, so I can continue to handle her solo. But, I definitely plan to keep this Surf Rider at least seven years before looking around again. She’s just right.”