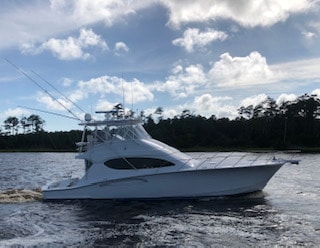 Daryl was extremely helpful throughout the whole process, a great communicator, and really moved the process along. In addition to being helpful, he has a vast knowledge of the boats and how to get the deal done. When we entered into the P/S, I asked him to do it in record time, almost an impossible time frame, however, he did it.

The boat was down being worked on at Jarret Bay, and even with a few glitches he was able to keep the boatyard on track, the former owners, and us the buyers. There was great communication between myself, Daryl, and Jarrett Bay. The boat was exactly as he described so we had very few surprises, from condition to mechanical. When he told me something during the process I had great confidence in what he was saying. I’ve bought and sold over 15 different boats and I can tell you that doesn’t happen often. Also Bluewater stepped to the plate and made some adjustments to get the deal done, I was impressed with how quickly they were able to move.

Daryl represents your company well and treats his customers just as well. I wouldn’t hesitate to refer either him or Bluewater if I had someone looking for a boat. Thank you for reaching out.