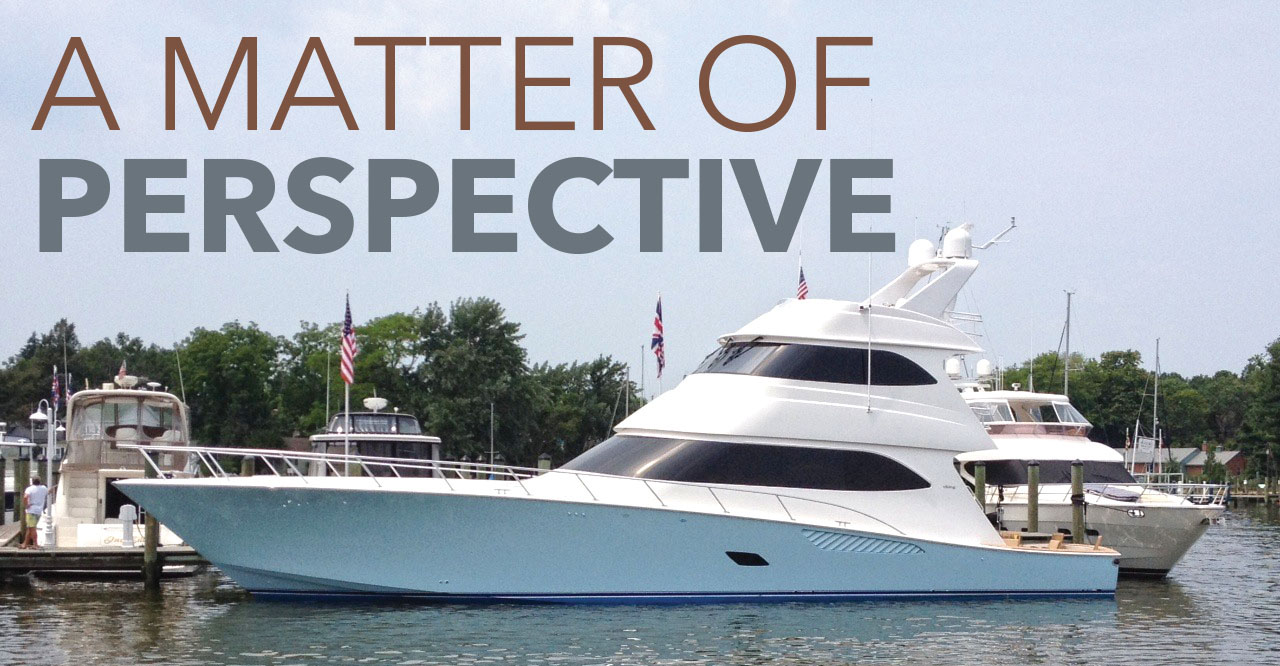 After 13 years, a long and meaningful relationship is either working or it’s not. Geof and Mary Bloom say it’s definitely working. Early in the new millennium the two met Bluewater sales professional Jud Black as they were searching to step up from a 53 convertible. After years of boardrooms, and 30 years of boating, the next boat needed to be a capable cruiser with all the comforts of home, moderate luxury and a killer view. Geof said that they just clicked with Jud and the relationship has flourished ever since. Jud agrees, “The best part of what I do is getting to live vicariously through my customers. I get to help them build the boat of their dreams. Watching that unfold is pretty cool. Geof and Mary have great ideas and have made all their boats pretty much an adventure for me.”

In 2002 Jud handed them the keys to their first new Viking 61 Enclosed Bridge. In the years since, they have continued to expand their boats and their time on the water, moving up to a 68 and more recently a 76. The Blooms cruise extensively spending approximately 10 months out of the year aboard their Viking 76 Enclosed Bridge. Moving up and down the East Coast, their winters are based out of Key Largo’s Ocean Reef, with forays into the Bahamas. Come spring they work their way up the coast for a biannual stop at the Bluewater Yachting Center and Yacht Yard in Hampton where Moderation gets completely serviced for the summer season. The next legs take them on up into New England and a whirlwind of traditional ports of call, Newport, Portsmouth, Martha’s Vineyard and up along the scenic Maine coastline. Geof Bloom believes they could not do it alone. “We all know how boats are. What you need to make this work is infrastructure. Bluewater is our infrastructure and our family.”Accompanied by another near-family member, Captain Max Murphy keeps the boat up all year long, monitoring systems, potential problems, mitigating problems and staying in touch with the Bluewater team in Hampton. When something goes wrong, his first call is to Service Coordinator Anita Coughenour, Yard Manager Craig Messick or Earle Hall directly. The Blooms feel strongly that Bluewater knows the boat best, and is therefore best suited to take care of any troubles that arise. “Moderation is our home and primary residence and you just want your own people to look after your stuff. Dragging a stranger onboard, no matter how talented they may be, just doesn’t work for us. Craig and his team are an integral part of our crew,” Bloom summarizes. “I know a lot about boat yards, as I lived in one for years. Those guys were terrible. Bluewater is darn good. I know if we have an issue they’ll help, usually above what we expect. They’ve bailed us out of a few bad experiences.” In one instance they were exiting the Cape Cod Canal when they lost thetheir steering. An immediate call to Bluewater put Craig Messick on the phone with Capt. Murphy and they were able to quickly diagnose a faulty steering pump. By the time the boat reached Boston, Bluewater had ordered a replacement pump from Viking Yachts and Earle Hall made arrangements to fly a Bluewater technician to the boat the next morning. The job was done that day and the cruise continued with no additional interruptions. 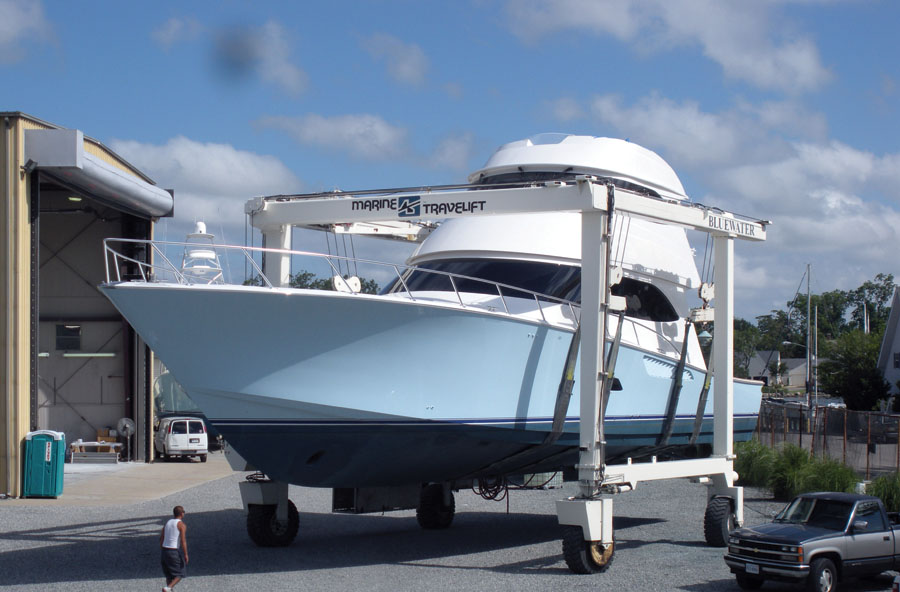 The Bloom’s Viking 76EB receiving the finishing touches on her skybridge.

“We’re at the Bluewater Yard at least twice a year, but they’re here for us all year long. Nothing about our lifestyle would work without Bluewater and we’re very satisfied with their extraordinary service.”

The Bloom’s belief in Bluewater has a foundation that was laid from the start. They wanted an outside upper level helm above the enclosed bridge on the 61, but it was not a standard feature. They wanted the comfort of the enclosed bridge, but also the ability to get out and enjoy the fresh air. Bloom explains, “Jud went to bat for us and finally convinced Viking to build the sky bridge we wanted and let Bluewater install it. It’s an important feature for us and we’ve put one on every boat since. Bluewater also designed, built and installed a custom arch for each one.” Listening to the customer and delivering what they want is a crucial page in Earle Hall’s playbook, “You’ve got to listen and comprehend what is really important to the customer, and then do what it takes to give it to them. That’s what service is all about, not just fixing what’s broken, but building them what they want from the start.” 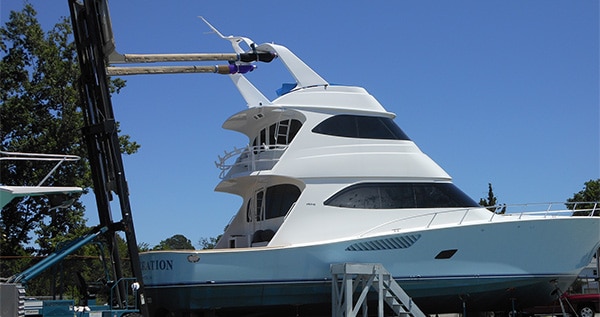 Installing the custom fabricated radar arch over the skybridge. 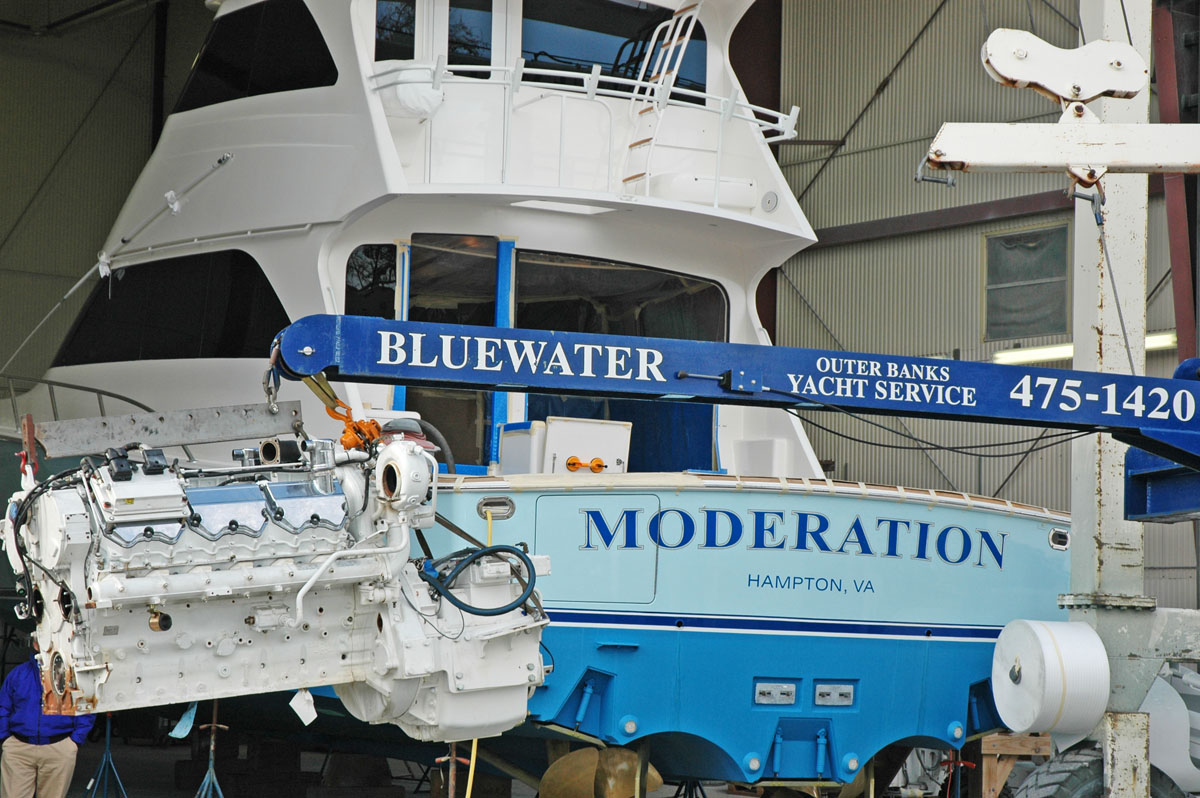 But fixing what is broken is important too, and nothing illustrated that for the Blooms better than their experience in the fall of 2010 when their 68’ required an engine repower. “We needed to get south to Ocean Reef quickly, and once again Bluewater went to bat for us arranging for the new units and installing them quickly.” As a rule, repowers requiring engine removal and replacement are not a walk in the park. The aft bulkhead and salon floor needed to be removed and then both engines lifted up and out without incident. Bluewater moved quickly to get the project rolling, utilizing their custom engineered hoist crane to smoothly pull and replacethe engines. “The whole crew was focused and intense about making this happen, it was pretty awesome,” recounts Earle Hall. Including the repower and the fabrication of new salon flooring and bulkhead, the entire project was concluded in seventeen days. The Blooms were amazed and stated that the boat was returned to them in bristol condition.