Dancin’ IN THE Moonlight

Dr. Kent and Judy Webb have been boating almost as long as they’ve been together and have lived a prosperous life dedicated to careers, family and boating. Tracing back to their first small runabout zipping across the lakes of Minnesota, the Webbs have owned over fifty boats in a variety of types and sizes. Regulator, Jarrett Bay, Bertram, Hatteras, Viking, Princess; the list is a who’s who of quality yacht manufacturers, and the Webbs have owned and operated all of them. So it’s of great testimonial value that the couple has placed a portion of their retirement nest egg in a basket produced by Princess Yachts. With the help of close friend and Bluewater sales professional Clark Sneed, they’ve quite literally been researching and working towards this moment for a lifetime.

After owning a string of convertibles in the 60-foot class and quickly nearing retirement, the couple purchased a beautiful new Princess 60 flybridge motoryacht in 2014. It had been awhile since they had owned a motoryacht, including a 63 and 75, and ultimately they decided they wanted a little more space than the 60 could provide. This was to be their ultimate retirement vehicle and home, after all… “And then Princess came out with the 68,” recalls Webb, “It was perfect for us.” The 60 performed admirably for them, sort of a pre-retirement trial run, but the larger beam and depth of the 68 provided for significantly more space. Since taking delivery of the 68 flybridge in January 2016, it is clear Dr. Webb has come to appreciate it greatly, “It is laid out extremely well, better than any motoryacht I’ve ever had… even the 75.” 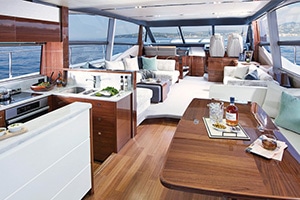 Having just recently retired before taking delivery, the Webbs have sold their home in Wrightsville Beach, North Carolina and have been living aboard the Moonlighter in Old Port Cove Marina in Palm Beach, Florida. “We’ve been coming here since the eighties, and just love the place. It’s been great to get out of the cold and we’ve been on the boat here almost every day since.” The couple particularly enjoys the outside spaces on their 68 and have spared no expense in outfitting it with maximum canvas for shade and protection from the sun. They opted to forego a tender and davit system on the aft flybride, which adds capacity to the already expansive lounge and seating areas available topside. With multiple cocktail tables, a refrigerator, icemaker and grill all located on the flybridge, it’s easy to see the endless entertainment possibilities. Down on the main level, Webb points out that the foredeck seating and the aft cockpit table and lounge are all connected via protected walkway and handrails—enabling the grandchildren and guests of all ages to traverse all the way around the main deck in safety and comfort.

While the 68 boasts the space and accommodations to have “people everywhere,” Webb deeply appreciates how such a large motoryacht can be operated when just he and his wife Judy are the only company aboard. “I really enjoy running the boat. I don’t do all the maintenance anymore like I used to, but it’s setup for two people to easily handle.” A wealth of features make this possible, including proportional bow thrusters, a cockpit helm station in addition to the bridge and lowerhelms, plus aft docking winches. “It has huge forward storage for fenders and lines and the aft side-gates make it easy for Judy or another deckhand to pass lines through. It’s the easiest handling motoryacht I’ve owned,” concludes Webb.

Thoroughly pleased with the outfitting and finish of his Princess 68, Webb cites the beautiful job the company did with installing a second generator, tightly fitting it atop the standard one in the lazarette. “It’s quite possibly the quietest boat I’ve owned, I have to strain to hear the generator.” Low noise and efficiency extend to the primary power he chose and “loves”—1400hp MANs providing for a top speed of 36 knots and a miserly cruising speed. Webb explains, “Amazingly, I found a cruise around 24-25 knots that seems to be more efficient than our (smaller, lighter) last boat. This is the best performing motoryacht I’ve owned.” The Webbs also enjoyed customizing and color-coordinating the interior décor, including wide-wood planking in the salon and matching non-skid rugs and runners. They exercised many options, including a heated towel rack in the master head, and one thing they learned from the layout of the 60—opting to replace the master stateroom sofa with an additional dresser. “We took a lot of time deciding on this boat and it really is the perfect size for us,” says Webb, adding that they can comfortably host their daughter, son-in-law and three grand-children with room to spare.

The Webbs have savored the process of working with Princess Yachts, even turning a visit to the factory into a U.K. sight-seeing trip with Bluewater’s Clark Sneed and his wife Renee. Ross Gill, Princess Yachts International Sales Manager showed them around the expansive facilities as well as parts of Plymouth, England where they explored the area’s harbor side restaurants and attractions. Back stateside, Dr. Webb recalls an exceptional delivery process overseen by Princess North America’s Ryan Fitchett in New Jersey (where all new Princess Yachts are initially shipped) and Tony Scaletti in Florida for final outfitting and delivery. “Tony was absolutely on top of everything with the setup of the boat, before and after delivery. He did a superb job and it was really the best delivery I’ve ever had on a boat. He stood behind everything and was always easy to contact,” recounts Webb. He is also grateful for the professionalism and help always provided by the Bluewater team during his many transactions, including that of President Jan Boone and Operations Manager Barbara Baize. Bluewater’s commitment to customer satisfaction can be illustrated in the little things, such as driving six-plus hours to fetch a cushion replacement in time for a scheduled departure.

“And then of course Clark…” adds Webb. Ah yes, Clark… who has been at the center of countless adventures with the Webbs over the years. From instigating a Marsh Harbour lobstering excursion where he was towed behind their inflatable in a wetsuit and snorkel gear, to sight-seeing Europe together, they’ve shared a lifetime of experiences. “We’ve been through so much together… storms, rough seas… so much. Anyone who wants to buy something that Clark Sneed sells, doesn’t need to look any further. He doesn’t forget you after the sale and will make sure everything is right. He has taken care of us moreso than anyone. In fact, he and Renee are visiting with us right now.”

Although home base will now be Palm Beach for most of the year, the Webbs plan to take Moonlighter north in the summer, visiting many familiar locations they’ve called home over the years, including Wrightsville Beach, North Carolina and Miles River, Maryland. They look forward to attending the Bluewater Summer Cruise in St. Michaels and then cruise parts of the Chesapeake Bay and Delaware River, making their way to Cape May. Back in North Carolina they’ll visit Beaufort, New Bern and Manteo by way of Albemarle Sound and hope to get to some other small towns they haven’t visited before by boat, including Edenton and Hertford.

The entire Bluewater team wishes them safe passage and looks forward to seeing them throughout our Mid-Atlantic network. In all honesty, it’s customers like Dr. Webb that have driven the marine industry forward over the decades and perhaps even helped keep a few builders afloat through rocky economic times in the past. Buying and configuring large yachts takes a lot of veracity and resources, and the Webbs have done so with such frequency and consistency throughout the years, they truly deserve every relaxing moment they can get aboard the newest Moonlighter.