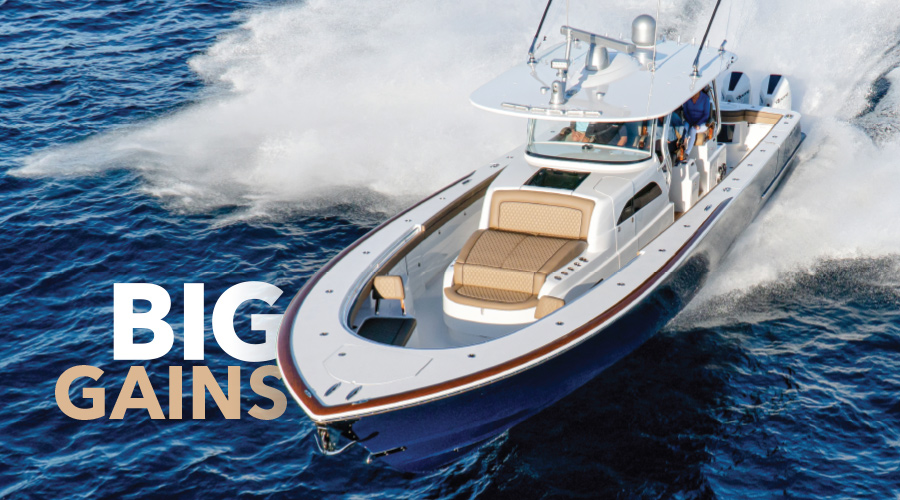 The Next Chapter of the Valhalla Fleet is an Immediate Success

Just 18 months after Viking Yacht Company President and CEO Pat Healey first announced Valhalla Boatworks to the world, they had already built and delivered 70 boats, with another 75 units on order. To have sold nearly 150 units, from just three available models, in under two years is an incredible feat. But there are zero plans to slow down.

On July 27th, 2020, Healey announced the next chapter of the Valhalla fleet with the V-46. As the new flagship of the Valhalla line, the 46 has taken the high performance, fish-forward design of the V-41 and added in more accommodations, living space, and creature comforts more commonly seen in larger express and sportfish boats.

View Listing
These big gains build on what has made the Valhalla brand such a resounding success: the Michael Peters Yacht Design double-stepped and ventilated tunnel hull. The idea for the V-46 came from listening to customers who wanted the convenience and power of a center console, but also needed room to entertain, and a larger climate-controlled cabin to escape the elements when needed. The hull length grew by six feet over the V-41 and the beam increased 21 inches.
See this article in our Summer 2021 issue of OnBoard Magazine 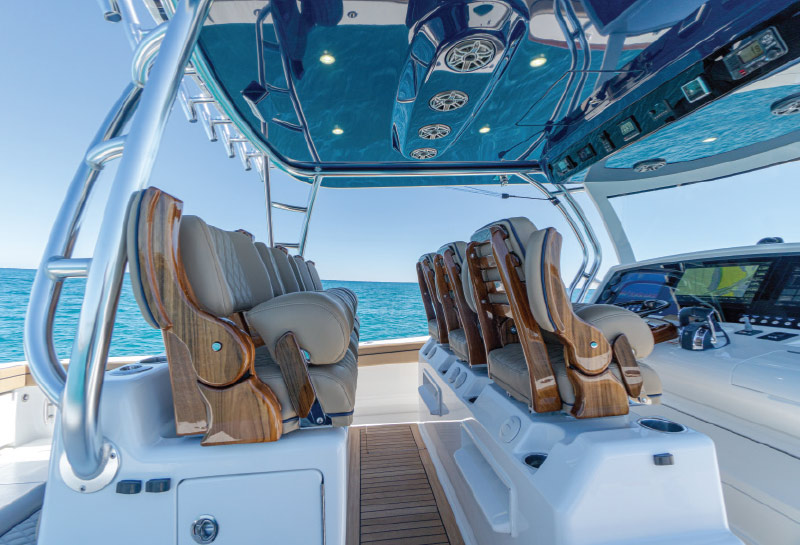 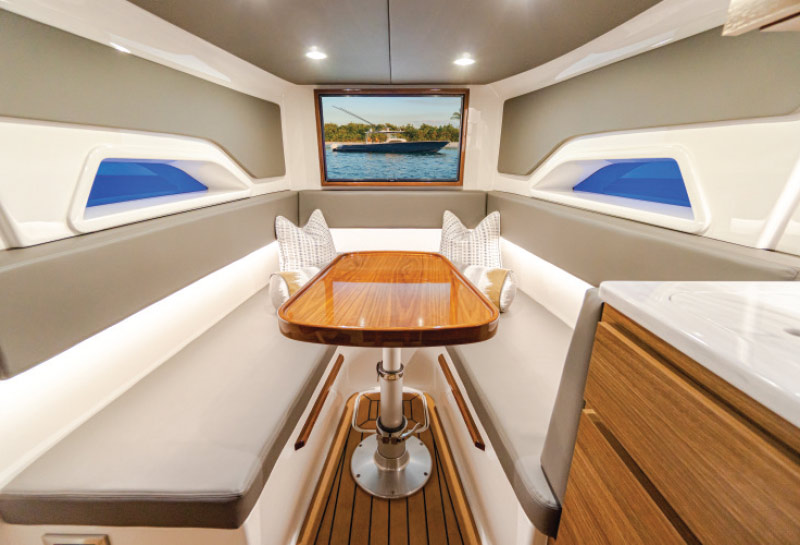 “That additional six feet allowed us to achieve the accommodations the customer is looking for with the added amenities of a full head with shower, air conditioning, bunk space, and a nice sized galley,” explains David Wilson, Design Manager for Valhalla Boatworks. The added length also provided second row seating at the helm without sacrificing the fishability. The aft facing mezzanine bench that is so popular on other Valhalla models is also a feature on the V-46.
Bluewater Yacht Sales Partner Earle Hall says, “This boat is a testament to Viking and Valhalla’s superb engineering. Nothing happens at Viking Yacht Company without a plan. This product demonstrates it, and the customer receives a better boat because of it.”

Another innovation showcased in the V-46 is found in the console with a dedicated machinery room. Until now, center console builders have advertised easy access to components, but Valhalla is changing the game with a separate room just for access to generators, batteries, battery distribution systems, a water heater and more. It’s a carry-over from how their bigger Viking cousins are configured. Components that require access and periodic maintenance will be contained in this space that is a true walk-in and stand-up electrical and mechanical space, which is accessed through a watertight door in the head. 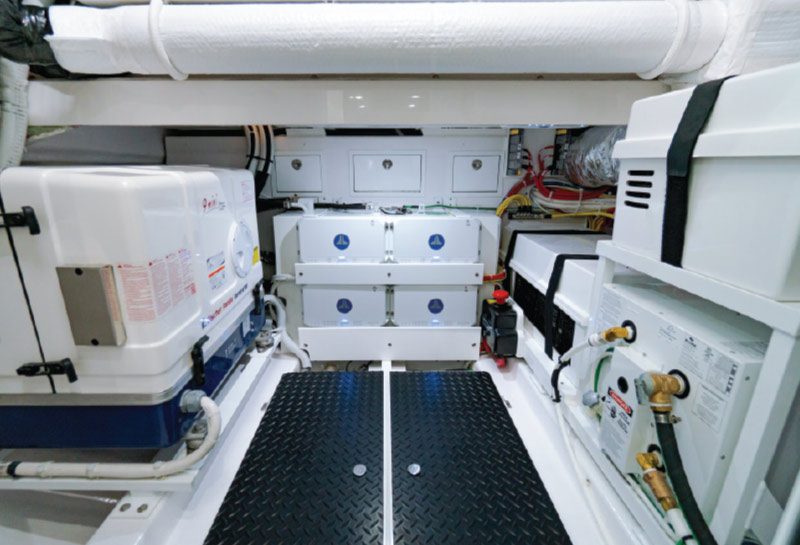 The V-46 machinery room is a feature borrowed from Viking’s larger convertibles, providing excellent access to key components.
Hall explains that Valhalla benefits over their center console rivals because the Viking team has already seen and done it all in their bigger boats. “This isn’t another small boat builder stretching their boats and capabilities. It’s a big boat builder applying their expertise to smaller boats, and it shows up in the systems,” says Hall. The stringer grid of every Valhalla model including the new V-46 is an infused, standalone part that is then placed in the hull during construction. The stringer grid also includes a dedicated space for an optional factory installed Seakeeper.
Hull 1 of the V-46 was completed in time to debut at the 2021 VIP Boat Show in South Florida. Equipped with new Mercury Verado 450R supercharged V8 outboards for a total of 1,800 horsepower, the V-46 was no slouch in the acceleration and speed category. Hall recounts, “the sea state that day was mean, but the boat ate it up. Its sea-kindliness is just mind blowing.” Its size and accommodations also impressed the VIPs in attendance, with Earle pointing out that while it’s a “big” boat in terms of a center console, perceptions change when you put it next to a motoryacht “mothership” as a first-class luxury fishing tender, as some of Bluewater’s first V-46 customers plan to do.
This V-46 was one of the first boats in the world outfitted with Mercury’s new Verado V12 Outboards
As if the splash of hull 1 wasn’t exciting enough, the Valhalla team had another surprise up their sleeves in early 2021. It turns out the V-46 was one of the secret test boats selected for Mercury Marine’s ground-breaking 600hp V12 Verado outboards! Both Earle Hall and Bluewater’s Sales Manager Baxter Lusink were in attendance for the unveiling and a demo ride in Central Florida, and both were floored by the new power options. “There’s really no comparison,” says Lusink when asked about the difference in power. 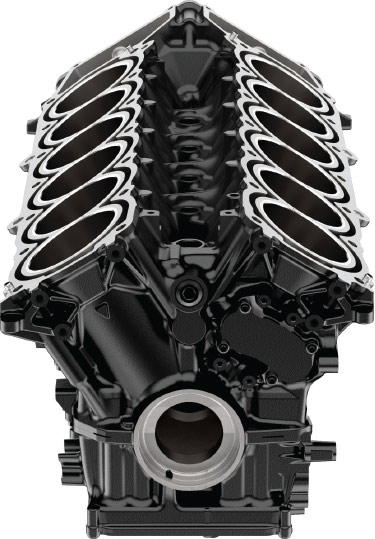 The entire Valhalla line has been wildly successful since the brand’s debut, and the V-46 and new power options have surely amplified the excitement. The new model’s popularity has already been proven by a break-neck pace of retail orders in 2021. Over fifty hulls of the V-46 are already spoken for, so if you want to get your hands on the big gains being made at Valhalla Boatworks, you better get in the queue immediately!
Get More Information