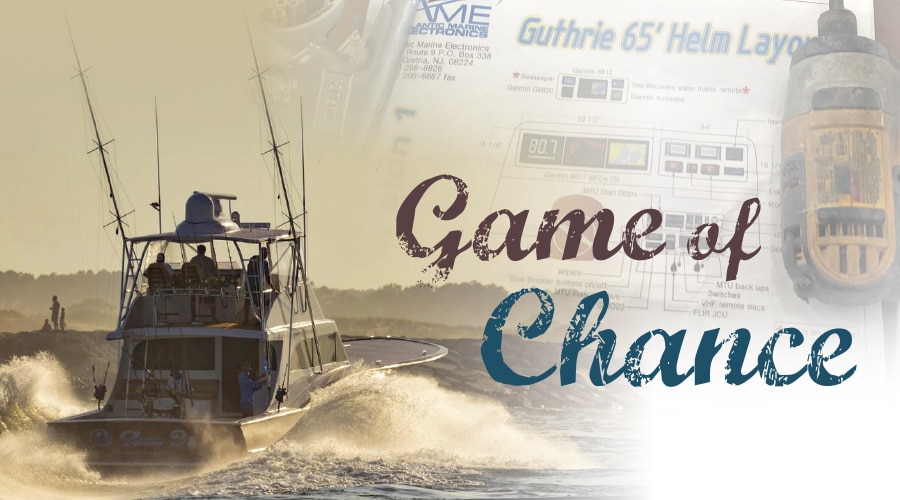 This is a story about a boat that may never have been, but for the story of two brothers taking a chance together, a broker with a “dream” boat, a captain in the right place at the right time and a boat yard that could see the “impossible” dream in a scrappy hull.

Rock, Paper, Scissors is a game of chance. But everyone who has ever played the game, also called Rochambeau, knows that there are some elements of strategy involved. It’s not often a one-shot decision, but involves elements of knowing your partner, watching the signs and good old-fashioned luck.

This is a story of how a boat that may never have been was brought to life, and brought together a family through the elements of strategic chance, imagination and ingenuity.

Nick and Rusty Shriver are brothers. Some call them polar opposites, two years apart, they grew up together and stuck together, raising their families on the Potomac in Solomons Island where they run a successful restaurant business. Nick is the front-of-house guy, the charming front man, and Rusty is the heart of the operation, investing long hot hours in the kitchen behind the scenes. They still played together, too, vacationing in Ocean City where they own a getaway spot on the shore. The game of Rock, Paper, Scissors—or Roshambeau—as their dad referred to it was how the boys made most of their big, life-changing decisions. 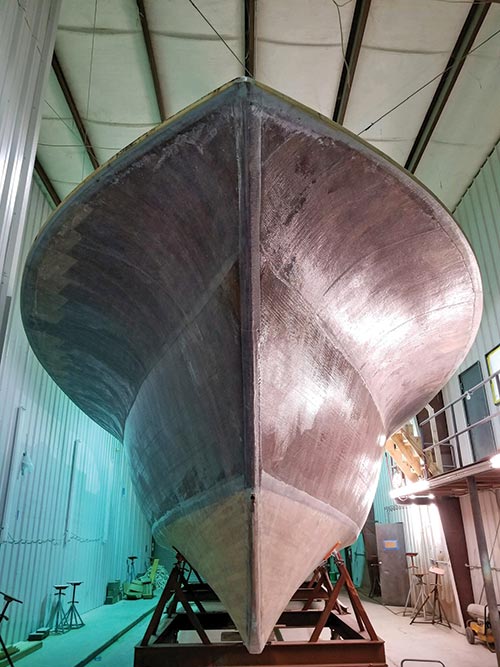 Ocean City is synonymous with offshore fishing, billed as the White Marlin Capital of the World. The brothers also had friends with whom they ventured into the deep, so those seeds were planted, fertilized by annual offshore sportfishing forays. But Rusty’s passion for fishing started closer to home; he set his roots and lines in the world that is bass fishing with long, solitary ventures into the intimate world of mapping every foot of the Potomac River, finding and outwitting his prey. He was invested in a world that challenged him, but demanded hours away from his work and family. As kids grew and priorities shifted, new opportunities arose.

When circumstances brought Captain Willie Zimmerman and the Shriver brothers into a conversation about setting up a charter boat operation, Captain Willie turned to his long time friend and Bluewater Sales Professional Jeremy Blunt. Given an idea and a budget, Jeremy began sending Nick Shriver some used boat listings, mostly older but solid custom builds. Nick’s response, “No, we want to start with a new boat” and Jeremy’s job became more complicated. He broadened his scope and hit upon a long shot concept, one that was burned into his own past dreams, but he thought, “what if?”

Years ago, his computer screensaver featured a boat that long sparked his imagination. Originally built as the Go Getter, the Lit Up was a 65’ custom Carolina build “Guthrie” that had driven him to seek out the spry septuagenarian boat builder Terry Guthrie. In 2008 Jeremy contacted Bluewater’s Joe Green who introduced him to “Tuck” and a hull he was building in a shed out back. They talked onwards of half a day.

Ten years later, as Jeremy was wracking his brain for a “new boat” concept that fit the brothers’ budget, Guthrie came to mind and he picked up the phone. What were the chances that a hull begun over a decade ago was still available? When Guthrie’s wife took the call and passed the phone, the answer became crystal, “why sure, I’ve still got her, she’s in the shed,” Tuck said. Knowing it was a long-shot, Jeremy’s excitement still spilled over into his conversation with Captain Willie and the brothers. Nick’s response was straightforward, “let’s go take a look.” 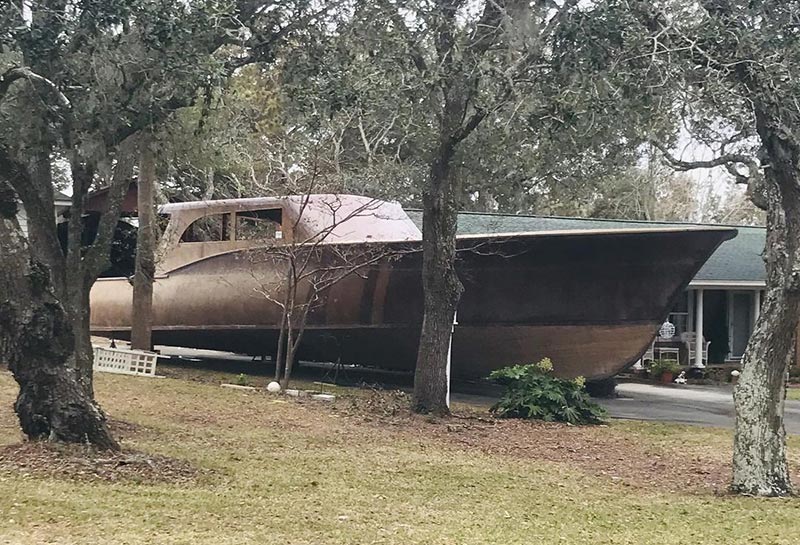 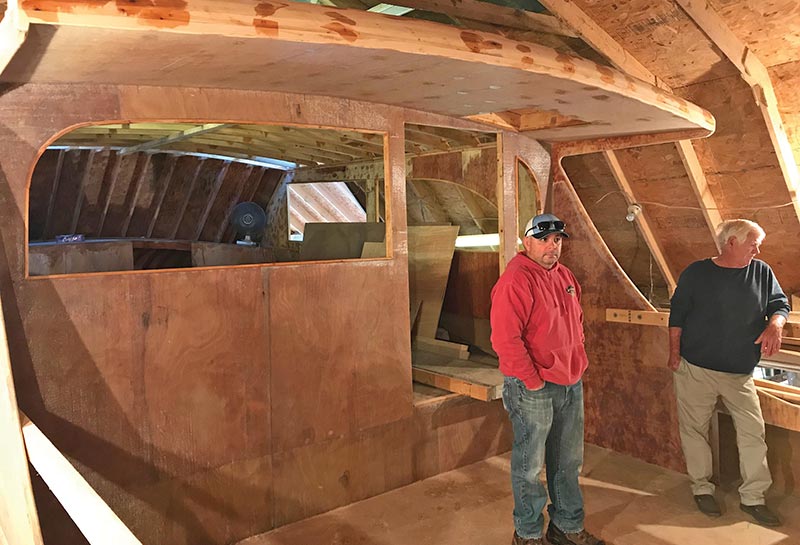 Nick and Rusty checking out Tuck, an in-progress sportfish from Guthrie Boatworks

To the unpracticed eye, it might have been a dubious start. A humble exterior can deceive and a naturally cob-webbed environment housing an unfinished plank-on-frame-built hull can look less like the proverbial diamond in the rough than you might imagine. In order to get the project off the ground, they would have to find a partner to finish out the build. Earle Hall and Jim Polatty of Bluewater Yacht Yards have seen more than their share of “rough” diamonds and otherwise. In this case, pictures could not do it justice and so Earle met the crew at Guthrie’s to see if there was a chance to make more of the story.

Though originally skeptical, Earle found the craftsmanship amazing and couldn’t get over how clean the lines showed. Here was that old school genius, the ability to take a hand-drawn craft into the real world with innate precision, hand-born craftmanship and produce a vessel both sound and beautiful. Earle brought in Jim Polatty, head of the Wanchese Bluewater Yard, who jumped at the chance and a plan was born.

The first hurdle was locating the juniper planks to finish out the hull, but even though now in his 80’s, Terry Guthrie came through and with the help of his grandson, they finished her. Rough but complete, she was delivered to a yard in Harker’s Island to be launched and delivered up the sound to Wanchese. Weather delayed the delivery company’s plans for several weeks when Nick got the call from a frustrated yard manager. “They told me the boat needed to go and I tried to explain that the contractors weren’t able to move it yet. That’s when he told me he had somebody who was willing to leave with it today.” Despite what was later described as a somewhat harrowing journey, that’s how the latest Terry Guthrie hull came to arrive at the Bluewater Yard docks some 90 miles up the sound in tow behind a shrimp boat from Marshallberg—an uncommon sight to say the least.

Jim Polatty knows his way around the boat building process from start to finish setting his craftmanship roots in Wanchese years ago. He knew Terry Guthrie to be a talented craftsman who could build an impeccable hull. “The process by which Guthrie and others build a hull will be a lost art soon, so this was a rare opportunity to be part of a unique project,” Jim enthused. “He built a tank, and she’s solid.”

“The process by which Guthrie and others build a hull will be a lost art soon, so this was a rare opportunity to be part of a unique project”

The project began with a clean slate, a bare hull with no interior, systems, no power. Nick and Rusty Shriver placed complete confidence in the team that had come together, relying on Bluewater’s expertise in the process and their Captain Willie Zimmerman’s bluewater experience. “The whole team was absolutely amazing and the project was truly a dream come true. Here we have the old-school craftmanship and art in the plank on frame construction, yet with all the amenities of newer technologies and updated design strategies. It’s the best of both worlds come together and we couldn’t be happier with the boat and the whole process,” states Zimmerman. 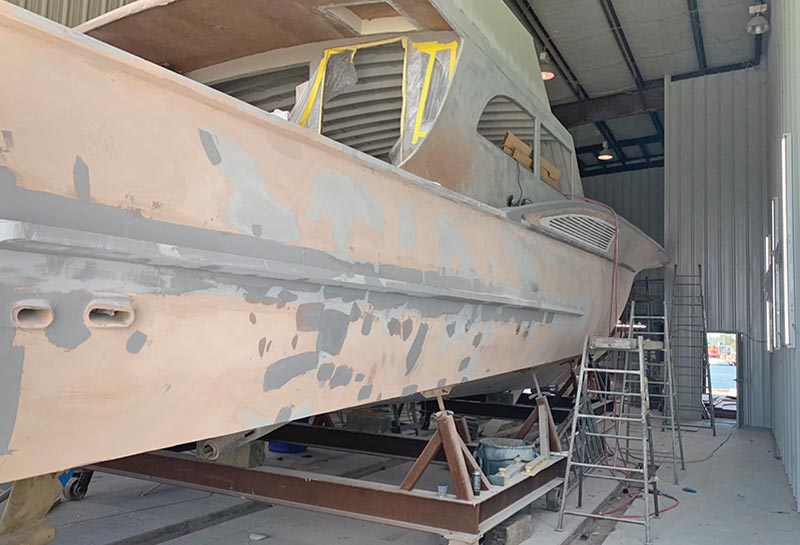 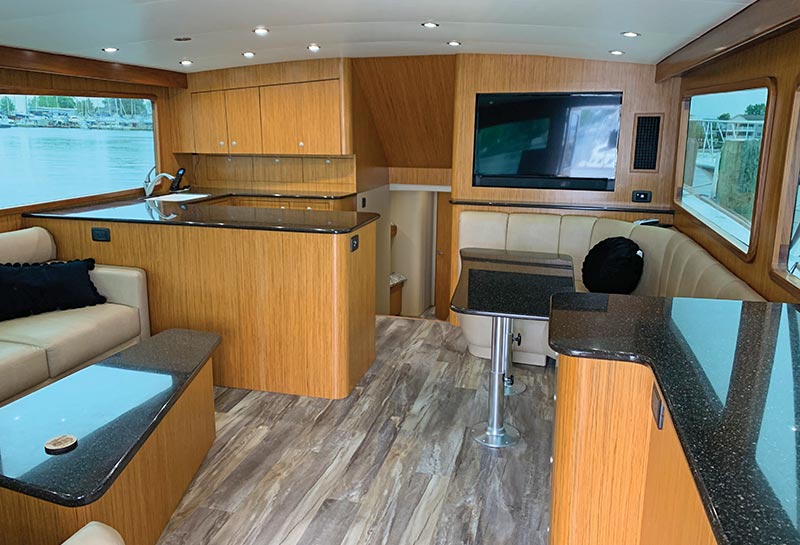 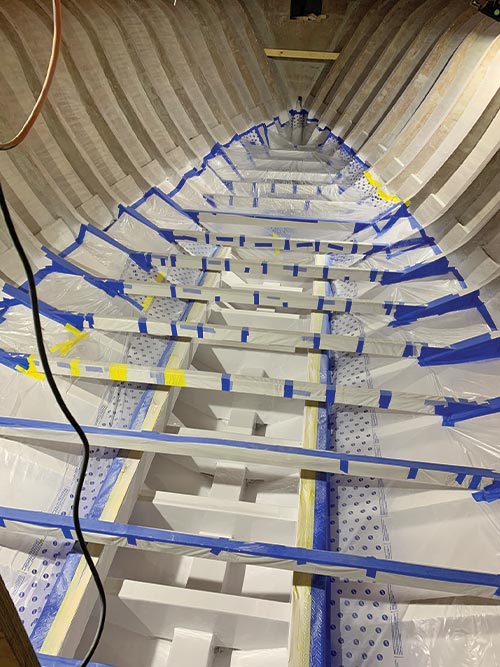 Polatty brought in Applied Concepts to design the entire interior and systems layout, a relationship of long standing and inherent trust. The project began with extensive measurements, the removal and testing of the fuel tanks, the inside was fully fiber-glassed and some decks replaced. The flybridge was built and attached and the running gear and propulsion systems spec’d out for the planned 1400 MAN engines. When an opportunity to make a deal to upgrade to a set of 1550s arose in the middle of all that, they essentially had to go back a few stages to make it work. “Working with customers who understand that delays can be opportunities and understand changes, is a great experience. Willie and the Shrivers took everything in stride and are just 1st class people to work with,” explained Polatty.

From the Shriver brothers’ and their Captain’s perspective, the Bluewater team made the whole experience the best they could imagine. “Bluewater was phenomenal every step of the way and Jim and Rhonda were great,” explains Nick.

“Bluewater was phenomenal every step of the way and Jim and Rhonda were great,” explains Nick.

Captain Willie Zimmerman pointed out that much of the project took place during the pandemic and travel to the boatyard in North Carolina was impossible for long stretches of time: “Rhonda sent pictures every week with updates from Jim and the crew. They made sure we were involved every step of the way.” Rusty Shriver added that the work was top notch on every detail and that Jim made sure he was as transparent as possible on every decision made—“it was really important to me as I was probably the most skeptical of the project, and they seemed to agree with me that ‘good things don’t come fast’ but I had every sense that Jim was straight with me on everything. It was an amazing experience.”

The Bluewater commitment to “on budget and on time” was fairly reached—even with the months delay for the new engine installation—and Ro Sham Bo splashed in July of 2020. She rides as she was built to in that “old school” style, but is replete with the most sophisticated gear imaginable, sporting two Seakeeper gyros, the latest Furuno Sonar and all the toys in the sportfishing arsenal.